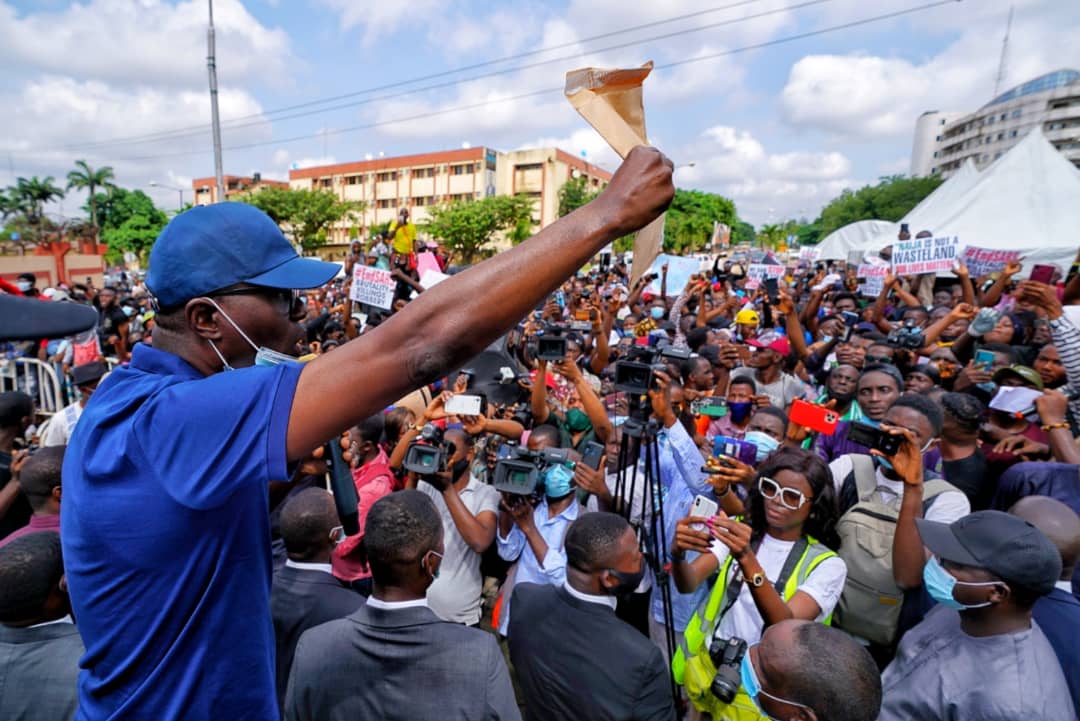 Lagos State Governor, Mr. Babajide Sanwo-Olu, has activated the process of getting justice for the victims of brutality and extra-judicial actions committed by some operatives of the Special Anti-Robbery Squad (SARS) – the dissolved tactical unit in the Nigeria Police Force in Lagos.

Sanwo-Olu, on Tuesday, said the State Government will be setting up a panel of enquiry that will comprise youth leaders appointed by EndSARS protesters, members of the public, Government officials and security agencies to look into the allegations of human rights abuses levelled against SARS operatives in the State.

The objective of the panel, the Governor said, is to bring indicted police officers to book and get justice for victims killed and maimed by SARS operatives.

Besides, Sanwo-Olu also set up a Trust Fund to compensate the families of the victims of police brutality in the State. The process of managing and disbursing the funds will be completely supervised by Civil Society Organisation (CSO) appointed by members of the public, the Governor said.

Sanwo-Olu made the development known while addressing the youth protesting against SARS’ excessiveness at the State House in Alausa. The protesters were led by Nollywood actors, music artistes, and comedians, among whom included Debo Adebayo, popularly known as MC Macaroni, and Oluwatoyin Bayegun, known as Woli Arole.

It was the second time in two days Sanwo-Olu would be meeting face-to-face with youths leading EndSARS campaign across the State. Yesterday, the Governor was at the Lekki Toll Plaza where protesters camped and blocked the expressway to air their agitations.

Sanwo-Olu reiterated that he identified with the protesters in their campaign against police brutality. He, however, pleaded with the aggrieved youths not to undermine the legitimacy of their grievances by being violent and destructive.

The protesters at Alausa handed a communique to the Governor, which detailed their five-point demands and expectations from the leadership.

Sanwo-Olu said Lagos State Government will be addressing three of the protesters’ demands that are within the purview of the State and vowed to engage the President and the Inspector General of Police (IGP) on the remaining demands.

The Governor said he would continue to engage the Federal Government to initiate reforms that will bring about the police force that will protect and respect the rights of the citizens.

He said: “I understand a lot of youths have been battered and maimed by the people who are supposed to protect you. I understand you all are feeling the pain of brutality, which is why you have been taking to streets to express your disappointment. Your voice has been heard loudly and actions have been taken from the highest office in the land to address your grievances. It is time for us to move forward and engage further on your demand.

“There is a five-point demands which you have submitted to us today. You demanded for the release of all protesters arrested on Monday. All of them have been released unconditionally. You demanded we set up a meeting that will lead to the process of getting justice and compensation for the victims of SARS brutality. I have instructed the Ministry of Youth and Social Development to set up a panel of enquiry ASAP that will get justice for the victims.

“We request that any citizen who has had a fatal encounter with SARS in Lagos to come forward and bring their cases to the panel. We will get justice for them. I have also set up a trust fund for the compensation of all victims of SARS brutality. For those who have died, we will be reaching out to their families. We request you (the protesters) to appoint your representatives into the panel and the Trust Fund for transparency.”

The Governor said the fourth and fifth points in the protesters’ demands, which border on police reform and improved remuneration for police officers across the country were not in the purview of the State. He, however, promised to personally deliver the message to President Buhari and the IGP.

Sanwo-Olu expressed concern over the violence that marred the EndSARS protest in Surulere on Monday, in which a civilian and a police officer died. He said the State Government had commenced investigation into the matter, but pleaded with the protesters not to take the laws into their own hands.

Sanwo-Olu assured the demonstrators that he would be leaving the protest ground for Abuja to meet with President Buhari and the IGP as he had promised.

He said: “As I did promise you yesterday that I will be meeting with Mr. President today to physically present your demands to him. From this protest ground, I will be leaving for Abuja to meet with President Buhari and IGP. I will deliver your message and demands.”

Sanwo-Olu, again, demonstrated his support for the EndSARS campaigners. He carried a placard and marched on the road with the protesters.

Related Topics:SANWO-OLUSANWO-OLU MOVES TO GET JUSTICE FOR VICTIMS OF SARS BRUTALITY; SETS UP ENQUIRY PANELSARS
Up Next