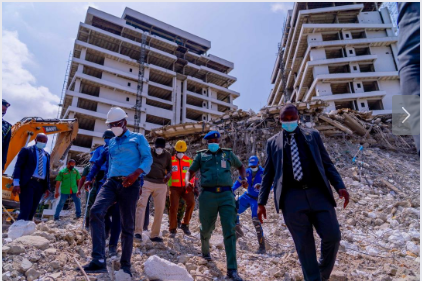 The Lagos State Governor, Mr. Babajide Olusola Sanwo-Olu, has been applauded for his “forthrightness and sincerity” in adopting the recommendations of the six-man panel set up to examine the Ikoyi building collapse. The 21-storey structure went down on November 1, last year.

During a telephone interview with the Commissioner for Information and Strategy, Mr. Gbenga Omotoso, on the 99.3FM radio programme “Daily Digest”, host Jimi Disu acknowledged that it took courage for Mr. Governor to adopt 26 of the 28 recommendations of the six-man panel.

Saluting Mr. Governor’s “courage”, Disu said, “We are not oblivious of the kind of pressure he must have gone through. If we lesser mortals have gone through so much pressure over the issue, then we must give him credit for doing this”.

Callers on the programme also praised Mr. Sanwo-Olu for not sweeping the matter under the carpet. They encouraged him to ensure that it is followed up till the end.

Responding to questions about compensation to families of those who died in the incident, Omotoso said all those who evacuated bodies of their loved ones and asked for assistance were given money for transportation and funeral.  Nobody, according to him, has come out to say he or she lost money in the incident.

Omotoso said: “The law has no room for such compensation, but if you’re talking about doing this on compassionate grounds, I know Mr. Governor as a compassionate leader.  If other people also put up a case for assistance with verifiable documentation, I am sure it is something that Mr. Governor may consider”.

On those doubting if indeed those indicted will be prosecuted, the Commissioner said Attorney-General Moyosore Onigbanjo (SAN) had been directed by Governor Sanwo-Olu to ensure that those found guilty of compromising the process of adherence to quality standards at the Foreshore Towers in Ikoyi are prosecuted.

Speaking further, Omotoso disclosed that the State Government was already fashioning out ways of collaboration with the private sector to strengthen monitoring and enforcement activities in the built sector in response to one of the recommendations of the panel on lack of adequate personnel to monitor building projects across the State.

He gave an assurance that all those found culpable in the process leading to the Foreshore Tower collapse, especially civil servants, will face sanctions.