The Economic and Financial Crimes Commission (EFCC), has explained why it arrested musician, Naira Marley.

Naira Marley was picked up alongside Omomniyi Temidayo popularly known as Zlatan Ibile in the early hours of Friday, May 10.

According to the commission’s acting spokesperson, Tony Orilade, his arrest was in relation to internet fraud cases known locally as ‘Yahoo Yahoo’.

The musician was not picked in isolation, as the EFCC also arrested some of his associates.

Orilade was quoted to have said: “Yes, he is with us. He’s not the only person; he had some other persons also arrested alongside (him).

“They were arrested in relation to advance fee fraud — Internet-related cases and all of that. Give me a little time and I will get you the details.”

Naira Marley has been trending for weeks over a controversial post on Instagram endorsing fraud. In the post, he described Yahoo Yahoo as the consequences for years of slavery. he was picked in Zlatan’s house and reports are that their laptops have been seized pending further investigations to confirm their involvement in wire fraud popular as Yahoo Yahoo. 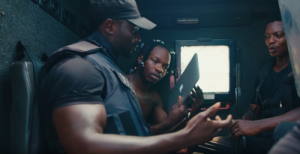 Celebrities such as Davido, Ruggedman, Simi, Vector have at one time or the order waded into the controversy caused by the post.

Days back, the rapper called out Ruggedman for calling him a fraud who doesn’t represent Nigeria during an interview. In a video which went viral, he described Ruggedman as a failed musician with a dwindling career.

Naira Marley was promoting the video of his latest single titled ‘Am I A Yahoo Boy’  released on Thursday before he was arrested. The song featured YBNL’s Zlatan Ibile.