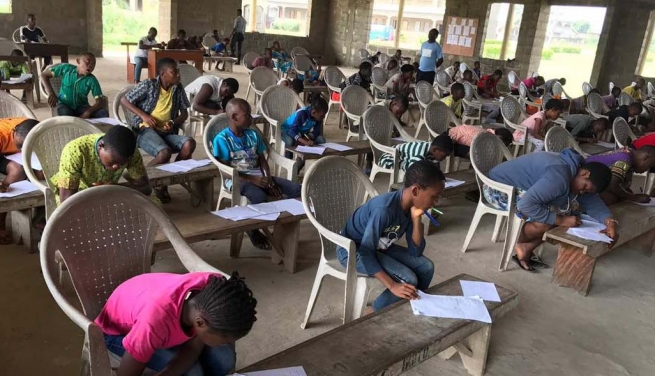 In most developed countries, education is the key to a successful life. However, the same cannot be said of Nigeria where the rot in the system appears to be worsening by the day.

One aspect which is currently generating controversy is the Unified Tertiary Matriculation Examination, (UTME) organised by the Joint Admission and Matriculation Board (JAMB).

Since the 2019 result was released, it has been a divergence of reactions, instigated by the decision of JAMB not to grant admission to the candidate with the best result due to his age.

A statement credited to Prof. Ishaq Oloyode, JAMB Registrar confirmed that 15 year-old Ekene Franklin, who sat for the examination in Abia State and scored 347 would not be granted admission.

Oloyede ascribed the decision to Franklin’s age, as 16 years is the mandatory age for admission.

While JAMB might be cautious of admitting teenagers who are barely mature into higher institutions, there have been questions about the body’s decision.

Concerned parents have asked why the body looks away when underage candidates buy forms, but won’t grant them admission when they pass.

“If the body does that to encourage the candidates to try their hands with the exam, it should be magnanimous enough to create awareness for them to know that if they pass the exams, they would not be granted admission. Better still, it can grant them admission and defer it till the following year. There are also those who think that it is a case of ‘the more the merrier’ for JAMB,” he said.

The decay in the system is not an exclusive of JAMB, as the National Common Entrance Examination (NCEE), and West African Examination Council (WAEC) have also had fingers pointed in their direction.

Recently, NCEE at the federal level conducted its entrance examination. Slated to begin on the resumption day of 3rd term session, it was no big deal for public schools. However, for private schools, the implication was that they had to forfeit a full term.  A child, who is yet to be taught his or her third term syllabus would sit for an exam on that basis and would be expected to do well.

In a country where the lifespan of a graduate expires almost before it begins, it is indeed pertinent that examination organising bodies sit up and review the age of admission, especially when the 6-3-3-4 module of education in Nigeria appears to be obsolete.

Worried at incessant policy formulation and implementation in Nigeria, Chidi Chukwura, an engineer with a renowned construction company, in an interview with Saturday INDEPENDENT, lamented on the future of Nigerian youth.

“Today, most organisations in Nigeria only employ graduates between the ages of 23 and 25 years. According to them, these are their most productive years. In some industries, a fresh graduate becomes unemployable at the age of 33, while the average graduation age from a tertiary institution now is between the age of 30 and 32. Why then does JAMB still restrict the age of admission? How many people will graduate before the age of 25 years?”

Indeed, the situation is terribly shocking. However, the rot that has led to the above shortsightedness and other excesses of the educational system didn’t begin today.

In the 60s, the educational system of Nigeria could almost rank with those in developed countries, as the products could compare to those produced in any part of the world.

However, the past few decades have seen the system become a shadow of its old self.

Today, African countries such as South Africa, Ghana, Zimbabwe, Equatorial Guinea, can boast of a more qualitative educational system than even Nigeria, which is regarded as the giant of Africa.

Recently speaking on the extent of the degradation in the system, former presidential candidate of Allied Congress Party of Nigeria (ACPN) and the convener of Bring Back Our Girl (BBOG) Obiageli Ezekwesili said that the current education system in Nigeria does not meet the needs of the society, as the time, spent on education by Nigerians and the value placed on that time does not match.

“You have to look at education as a system that has got input and output. Your measurement of what the impact and the outcome really stand for, when you do that, then you realise we are in serious trouble.  We have been in serious trouble since the time I was the minister of education. The quality and relevance do not match the needs of the society and therefore there is a mismatch.”

Speaking further, Ezekwesili said “When we did the diagnostics to the problems of education as of 2006, we had to generate 436 elements of reforms that we will need to do in order to move the Nigerian education system from the dysfunctionality that it was then and still is now, if not worse- to a system that produces world-class human capital for our country.”

But where did we get it wrong, at what point did the Nigerian educational system derail?

Professor Tunde Opeibi of the University of Lagos stated that the problem was more than imagined. The Professor of English Language said: “I believe education started falling during the military regime. Military rule has always been an albatross, the regime impacted negatively on many aspects of our political and social life and when the politicians also came into power, the tendency of corruption, which is the bane of everything scattered the educational system.

“School administrators that should spend the little they receive to take care of their responsibilities don’t. The politicians are worse because when they go to inspect educational projects, all they inspect is window dressing. So we have to go back to the foundations and address the issues from scratch.

“The government has to re-train the teachers and provide them with good facilities, they should enhance the environment so that the students would be comfortable studying. If they don’t take care of the teachers or give them the best, how can they give their best to the children?

“Even those of us in the institution, how much do we earn? Look at ASUU’s problem with the government over the years. People would think ASUU is only fighting for salaries, but it is not so. I have been outside the country and I know the number of students in a class compared to what we have here in Nigeria. In other countries, there cannot be over 15 students in a class, but here in Nigeria you can teach over 200 students in a class and it is worse in the public primary schools. How do you expect teachers to be effective in their teaching? How do you expect the students to pay attention and give their best? The teachers are even frustrated; they don’t even know when the next salary will come. In Nigeria, there are a lot of problems in the educational sector.”

On her part, Mrs. Iyasele Gabriella, a former secretary of the National Association of Proprietors of Private Schools (NAPPS) noted that for education to be standard, parents have to give their children the chance to do it on their own instead of helping out all the time. She also said parents, schools, and examination bodies have to come together to form an alliance or else things won’t change.

“As far as the worsening educational system of Nigeria is concerned, parents majorly are to blame because they encourage malpractice among the children and it is not the best.

“Many parents feel that for their children to go to a private school, they must pass all their examination papers.  Children are supposed to write what they learn but it is not so with some parents as they always want their children to pass with flying colours. So why won’t there be malpractice when the private schools want to live up to the parents’ expectations?” Mrs. Gabriella asked.

In the past, when education in Nigeria had value, it wasn’t commonplace to find Nigerians rushing to study abroad. Today, the reverse is the case.

The situation is now so bad that the average Nigerian wants to school abroad. However, it appears an exclusive opportunity for the rich.

Research has revealed that asides the fact that schooling abroad tends to encourage the rot of the educational system in Nigeria, there is also a huge capital loss.

Experts have unanimously agreed that Nigeria loses more than can be imagined via educational tourism.

One obvious fact is that while Nigerians travel abroad to study, spending hard-earned foreign exchange, the same cannot be said of foreigners coming into the country to study.

Exchange programmes do not work in Nigeria. However, in countries such as America, London, South Africa, and Ghana, it is a huge source of foreign exchange. Students also seem to gain a lot.

Chinwendu Okoro, who is currently running a Masters’ degree programme at Leeds Beckett University in the United Kingdom, said that he prefers to study abroad because the standards of the universities are far better.

“Studying outside the country has been a good experience for me. It has helped me in terms of the intercultural environment which makes learning seem global because I have been able to relate with students from different parts of the world through a series of discussions and group work. Apart from that, the standards here are also quite good; at least some of my lecturers have been to Nigeria to help train staff of top companies.”

On her part, Caroline Odeneye, a student at Vancouver Island University in Canada said she has no reason to complain about studying abroad. “Though there are some good schools in Nigeria, the system in Canada is better structured with a nice, conducive learning environment and this enables better training. Personally, I also get to know about other climes and cultures.”

According to him, “the educational system in Nigeria derailed because those who designed the curriculum were office people and not the teachers on the field. To polish the impracticable curriculum, those who do not value education were made the ministers and commissioners of education. With this, the standard of education began to crumble without them knowing.

“As if that was not bad enough, training of educators began to go unchecked. Heavy blows were given to the system when merit was set at the back seat and quota system and money began to be in control of which child would be admitted to which school.”

He further stated that salt was added to the injury when those who were well-read couldn’t get jobs, but nonentities became the chairman, directors, and managers of big industries, ministries and companies while brainy individuals were wasted on the streets without employment.

But not all hope appears to be lost. Prof. Opeibi highlights how the country’s educational system can return to its old glory.

According to him, finding the solution to the educational system of the country means going back to the foundation.

“For education to be okay, we have to go back to the primary school system. We have to start from there. They must create an enabling environment for teachers to do their best including facilities, and put in place proper infrastructure. They must ensure that teachers are happy. If they are not happy they cannot deliver on the mandate that they have.”

Proffering her own solution to the problem of the education sector, Iyasele said “the solution to the crisis in the sector can be corrected via awareness. Parents, schools and exam boards need to come together to put things in order or else the trend would continue.”

Like Iyasele and Prof. Opeibi, there are those who believe that the education system in Nigeria can still get better if it will remain to be seen.

Related Topics:Quality; Relevance Of Education Do Not Match Needs Of The Society- EzekwesilislideshowUnified Tertiary Matriculation Examination
Up Next

Theresa May To Step Down As Conservative Leader