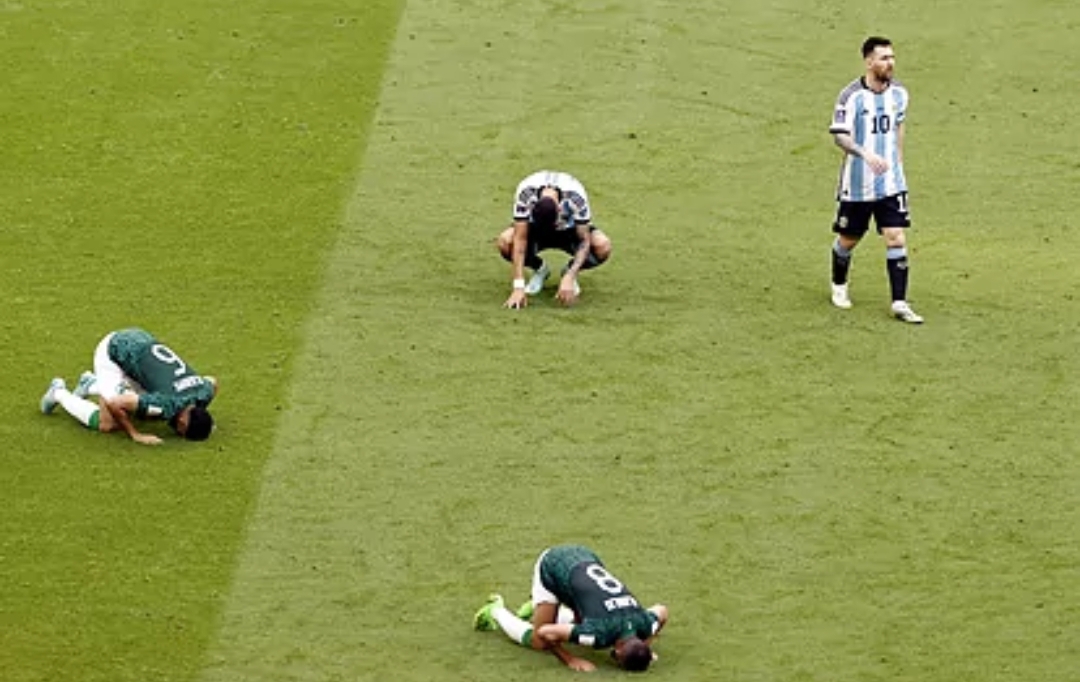 Argentina, Saudi Arabia, Poland and Mexico are grouped in Group C of the ongoing world cup.

The match which Tuesday afternoon November 22, 2022, saw Argentina suffering one of its biggest defeats in it’s football history after Saudi Arabia completed a remarkable comeback victory at the Lusail Iconic Stadium to defeat an Argentina team that had Lionel Messi, Angel Di Maria and Nicolás Ortamendi in the lineup..

Argentines went ahead early in the game with a goal from the penalty spot by Lionel Messi on the 10th minute.

However, their goal was cancelled by Saudi Arabia’s Saleh Al-Shehri’s goal on the 49th minute bringing the match to

1 – 1. Another goal by S. Al Dawsari on the 53rd minute saw the underdogs leading the team from  South America 2-1.

From then on, Saudi Arabia held on to record their first-ever victory against Argentina.

Ahead of the match, Saudi Arabia’s coach, Herve Renard had been quoted as saying that his team are not just in Qatar to make up the numbers.

Speaking at a press conference on Monday, Renard said: “Cristiano [Ronaldo] and Messi are football legends and thanks to them, football is different. It’s an honour to be here and play against them.

“When there’s a fight you have to be one hundred per cent motivated to beat the best. That’s the beauty of sport. In sport, there can always be surprises.

“We have to be ready. Above all, we have to be very good in all three games, not only against Argentina. All three are equally important.”

Saudi Arabia will play it’s next world cup match against Poland on November 26 and then Mexico four days later.

While conceding it is unlikely Saudi Arabia will qualify, Renard insisted his team – ranked 51st in the FIFA rankings, one place below hosts Qatar – will “fight against the forecasts”.

“We love it when they forget about us from the outside,” he said. “We like this, that they consider us the smallest team. It doesn’t matter to us. It’s justified if we take into account the FIFA ranking.

“I don’t think we’ll go to the next round but we’re here to fight against the forecasts. In the World Cup, there are surprises and that is the mentality we have.”