Primate Babatunde Elijah Ayodele of INRI Evangelical Spiritual Church has revealed that the days of Abubakar Shekau are numbered. 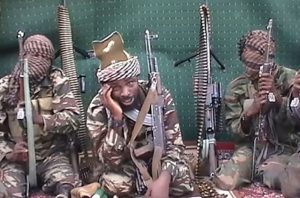 Caption: A screengrab taken on September 25, 2013 from a video distributed through an intermediary to local reporters and seen by AFP, shows a man claiming to be the leader of Nigerian Islamist extremist group Boko Haram Abubakar Shekau. The video, which comes after an outburst of violence in northeastern Nigeria, shows the man taunting world leaders after the military said he may have been killed.

Shekau is the leader of Boko Haram, a militant group terrorising Nigeria and other west African countries.

The group is known to have declared loyalty to the Islamist militant groups, Islamic State of Iraq and the Levant.

Speaking through his 2021 prophecy, tagged “Year 2021 And Beyound Prophecies: INRI Evangelical Spiriritual Church”, the servant of the Most High God said that God had revealed that the cause of Boko Haram insurgency is the attitude of the top hierarchy in the government.

“They have turned the Boko Haram matter to a florishing business. The Military can arrest Boko Haram, but both the military and the government are beginning to be interested in Boko Haram’s negotiation.

“Government have paid large sums of money as ransom to the jihadist. I am seeing so many things surrounding Boko Haram, only God can save us.

“Shekau’s days are numbered which is the reason why all this kidnapping, Fulani herdsmen, and Meyatti Allah Association members are categorised as terrorist group because they are giving the people problem, they harm and inflict injuries on the innocent. I forsee that very soon they will see the anger of God and those in government who have caused people a lot of hardship.”

Stating that Boko Haram is operating in every part of Nigeria, Primate Ayodele said that the international community will still get involved to help Nigeria fight the war of Boko Haram, adding that any government official involved with Boko Haram will face the wrath of God.

“The government and the security agent know the truth but they can’t come and out and tell the truth to the world.

“There will be so many leakages about all these irregular acts. Boko Haram will still do a very deadly attack which will make everybody to stand on their toes. The issue of security will make people become aggressive and protest over it,” the man of God said in his latest prophecy.