A former Minister of Aviation has slammed President Muhammadu Buhari over his speech on the widespread destruction of public and private properties resulting from the #EndSARS protest.

Femi Fani-Kayode (FFK), described the President as a ”dictator, a disgrace to humanity and a stench in the nostrils of God for allegedly issuing threats and serving warnings in his speech.”

FFK while reacting to the speech by the President said that it is left for the Nigerian people to either stand down, bow their heads in shame, tuck their tail between their legs and run away or either stand up, hold their heads up high, knuckle down, dig deep and insist on their rights.

Buhari’s speech was an insult to our people, a disgrace to humanity & a stench in the nostrils of God. He is not warm, he is cold. He is not kind, he is cruel. He is not empathetic, he is sociopathic. He is not a President,he is a dictator. He is not a man, he is a monster.

He has issued his threat &served his warning. It is left to the Nig. people to either stand down, bow their heads in shame, tuck their tail between their legs & run away or stand up, hold their heads up high, knuckle down, dig deep, insist on their rights & refuse to budge

The next few days will reveal which choice they have made. 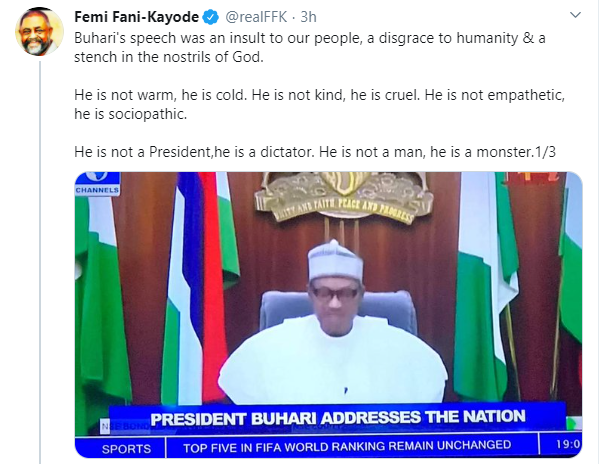