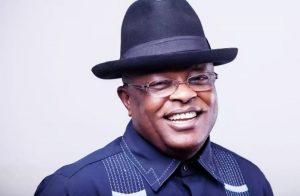 Nigeria’s President, Muhammadu Buhari has reacted to the defection of the Ebonyi State governor, David Umahi.

Reacting to the development, the president commended Governor Umahi,  describing his defection as a bold move which was mainly driven by principles.

In the statement released on Wednesday, November 18, by the president’s Senior Special Assistant on Media and Publicity, Garba Shehu, the president said: “I am proud of Governor David Umahi for taking this bold decision in accordance with his conscience and principles rather than any external influence or coercion.”

He added that the future of Nigeria’s democracy is brighter with men like Governor Umahi, noting that some people may call the governor names for dumping the PDP stating that that is the price men of principles have to pay for acting according to their conscience and convictions.

One More Governor To Leave PDP-Wike