The Nigerian Police has arrested one of the hoodlums who participated in the setting ablaze of a Lagos police station.

He was arrested while wearing the uniform of a DPO. 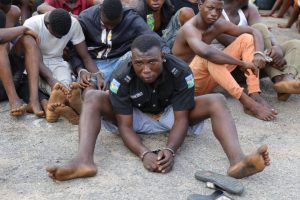 The suspect was paraded before newsmen by the Lagos state police command on Tuesday, October 27.

Recall that several police station were razed down by hoodlums after the EndSARS protest was hijacked.

#EndSARS: Lai Mohammed Attempts To Regulate Social Media, Says “Next War Would Be On Social Media”