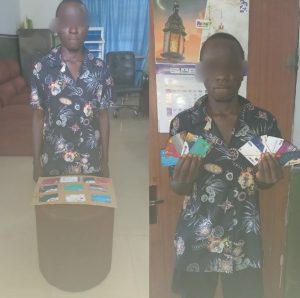 The suspect, a native of Nnewi South  Anambra State and resident of Makurdi, Benue State, was said to have been invited to Yola by his friend, Obinna Ajima now at large for joint fraudulent activities.

”Preliminary investigation reveals that, the suspects goes around with several expired ATM cards of various banks and await their victims, they usually queue behind customers with pretend as customers  and usually offers to assist anyone they perceive is having difficulties in making transactions and in the process take note of the person’s  ATM pin number and smartly swap the card with the fake one in their hand.” a statement by SP Suleiman Nguroje,” reads in part.

The spokesperson mentioned that the state Commissioner of Police CP SK Akande commended the effort of the operatives in apprehending such criminal minded elements, equally directed that effort be intensify to arrest the other suspect who is currently at large.

Don’t Engage In Violence For Politicians, Kukah To Nigerians