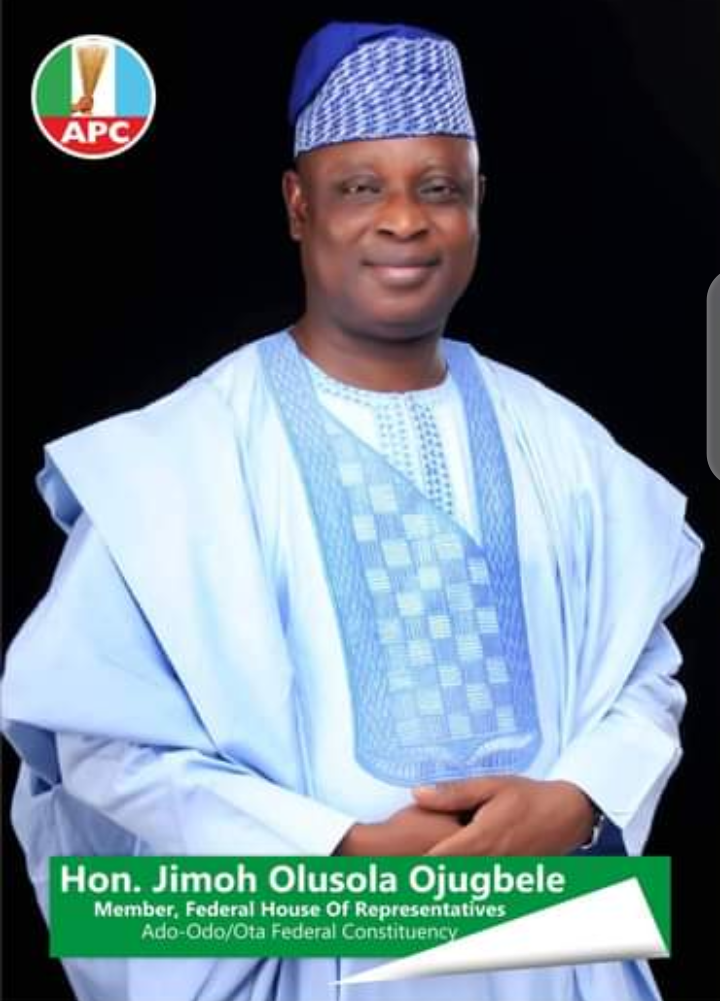 …. Why People Want Him Back In National Assembly.

A member of the Federal House of Representatives from Ado-Odo/Ota Constituency, Ogun State, Hon. Jimoh Ojugbele is seen by the people of the area as the man that has turned public office to real public service and a way to develop the people and the area.

For many of the residents of the Ado-Odo/Ota, Hon. Ojugbele has not disappointed based on his activities in the constituency since he got into office.

They gave instances of Ojugbele’s people oriented programmes covering provision of social amenities, infrastructure, empowerment, security and other areas, where they said he has touched the lives of the people.

According to a resident of the constituency, who gave his name as Adebayo Onifade, life has now become better with Hon. Jimoh Ojugbele in the saddle as the representative of the area in the Federal House of Representatives.

He pointed to the provision of boreholes for the residents, road rehabilitation, construction of classrooms at Araromi Orita-Atan Ota, block of 3 classrooms at Odan Ejila amongst others as his legacies that will continue to live with he people of the area.

These were corroborated by another resident, Alhaja Nimota Ogunyemi, who stated that Ojugbele has proven that public office could be used for the benefit of the people

Onifade and Oluseye commended Ojugbele for the provision of transformers in many areas, construction of modern police station in Igbesa and some other things that he has done as his unforgettable projects that would outlive him.

It will be recalled that Hon. Ojugbele massively supported the incumbent Chairman of Ado-Odo/Ota Local Government, Hon. Sheriff Adewale Musa with financial resources and backed him morally during the campaign that led to his emergence few months back.

The lawmaker once donated three Toyota Camry cars to the Chief Imams of Ado-Odo, Ota and Igbesa.

The cars were donated to the clerics in the spirit of Ramadan and for the celebration of this year’s Eid-il-Fitri.

The Imams were full of prayers for Ojugbele, who they said has proven to be a round peg in a round hole since he got to the green chamber.

According to them, Ojugbele has been fulfilling his campaign promises to the people of the area as they pointed to the various developmental projects that he has facilitated since he got to office.

The Imams then urged other public office holders to emulate Ojugbele, saying that the area has never had it so good since the beginning of the new democratic dispensation in the country in 1999.

On his part, Hon. Ojugbele promised to continue to live to the expectation of his constituents.

Ojugbele is noted for his philanthropic activities in Ado-Odo/Ota.

Hundreds of students are currently enjoying his scholarship awards in various tertiary institutions, while thousands of indigenes and residents of Ado-Odo/Ota have benefitted from his empowerment programmes.

Most Community Development Associations (CDAs) in the area have also been presented with hundreds of electricity transformers amongst other items.

Last year, in response to the urgent need of hand sanitizers and to complement the efforts of the Governor of Ogun State, Mr. Dapo Abiodun in preventing the spread of the dreaded Coronavirus disease in the state, Hon. Jimoh Ojugbele ordered the production of 10,000 hand sanitizers to be distributed free to his constituents.

On why he decided to embark on the project, Hon. Ojugbele revealed that the welfare of his people was paramount to him and that he was prepared to ensure that the disease did not spread in the constituency and in Ogun State generally.

He stated further that the sanitizers would be distributed to the constituents indiscriminately and that the distribution would not be on the basis of political affiliation.

“All of us are aware of the evil that Coronavirus has done around the world. We must do everything within our power to prevent its spread in our community in our own little way.

“May I use this opportunity to commend the Federal Government of Nigeria and the Ogun State government on the way they have been working hard to prevent the spread of the disease,” he said.

These are apart from his daily activities amongst the residents of the area, where he plays active roles in donating to church and mosque projects, youth empowerment, support for the aged/ widows and fighting the cause of the people of the area in the green chamber.

On why he did not relent in making life better for the people, Ojugbele said that he was in office to positively affect the people’s lives, which he said he would continue to do as long as he is given the opportunity to serve.

“My calling is to help my people. I didn’t vie for this office to amass wealth. I’m there to serve the people and I will continue to do that as their representative.

“The people of Ado-Odo/Ota have suffered enough. We must do our best to uplift their lives. Nothing is too much for me to do for my people. It is an agreement that I have with them and I will not relent in doing that,” he said in an interview, adding that better things would be expected in the nearest future.