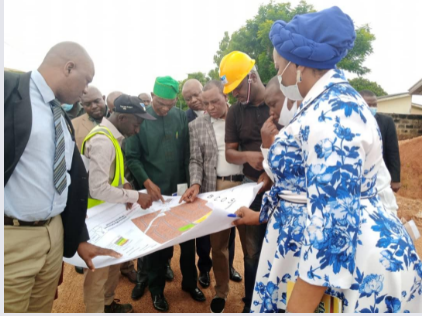 The Oyo State Government has frowned at illegal occupants of government properties, adding that those in such acts should desist forthwith or face the wrath of the law.

The Honourable Commissioner for Lands, Housing and Urban Development, Tpl Olusegun Emmanuel Olayiwola, who made this disclosure during his visit to some of the GRAs in the week warned that the state government will deal decisively with anyone found or caught illegally occupying any of the state government properties.

Speaking at the Rashidi Adewolu Ladoja GRA along Lagos-Ibadan Expressway which according to the Commissioner covers about 100 hectares of land not far from the Lagos-Ibadan Toll Gate, Tpl Olayiwola said the facility provider at the GRA will move to site any moment from now.

He said this is part of efforts of the Governor Seyi Makinde-led administration to provide affordable housing for the increasing population in the State.

“By December anyone that comes around here in this GRA will know that Governor Seyi Makinde is working hard to urbanize Ibadan. From what you saw on the signpost, you could see that something different entirely is already happening here and by the grace of God by December you will be impressed with what would have been done.”

“You know a GRA is a quiet, serene, and secluded environment. This GRA is such a beautiful place such that mobility is very convenient for residents of this place either going to Lagos or going to the city from here. And I can assure you facilities such as the road, drainages, electricity, etc. for the GRA will be provided even before construction starts, that’s why we are first and foremost, engaging facility providers before we start building.” Tpl Olayiwola said.

While addressing residents of Ajia community in Ona-Ara, the Commissioner stated that the state government has put in place measures proper relocation of the market in the area to enable government develop the site to a modern residential area.

The Commissioner maintained that the commitment of Governor Seyi Makinde-led Government towards urbanizing Ibadan to a 21st century standard remains unwavering noting that critical infrastructures of a modern society being put in place by the present administration was strategic and deliberate.

The Commissioner who was in company of the Permanent Secretary to the Ministry, Tpl Ademola Ajibola, Oyo State Surveyor-General, and other top government officials in the ministry during a visit to Lere Adigun GRA behind the Broadcasting Corporation of Oyo State (BCOS) in Bashorun had a brief stop at Oyo Free Trade Zones and Omololu Olunloyo GRA, Ibadan.