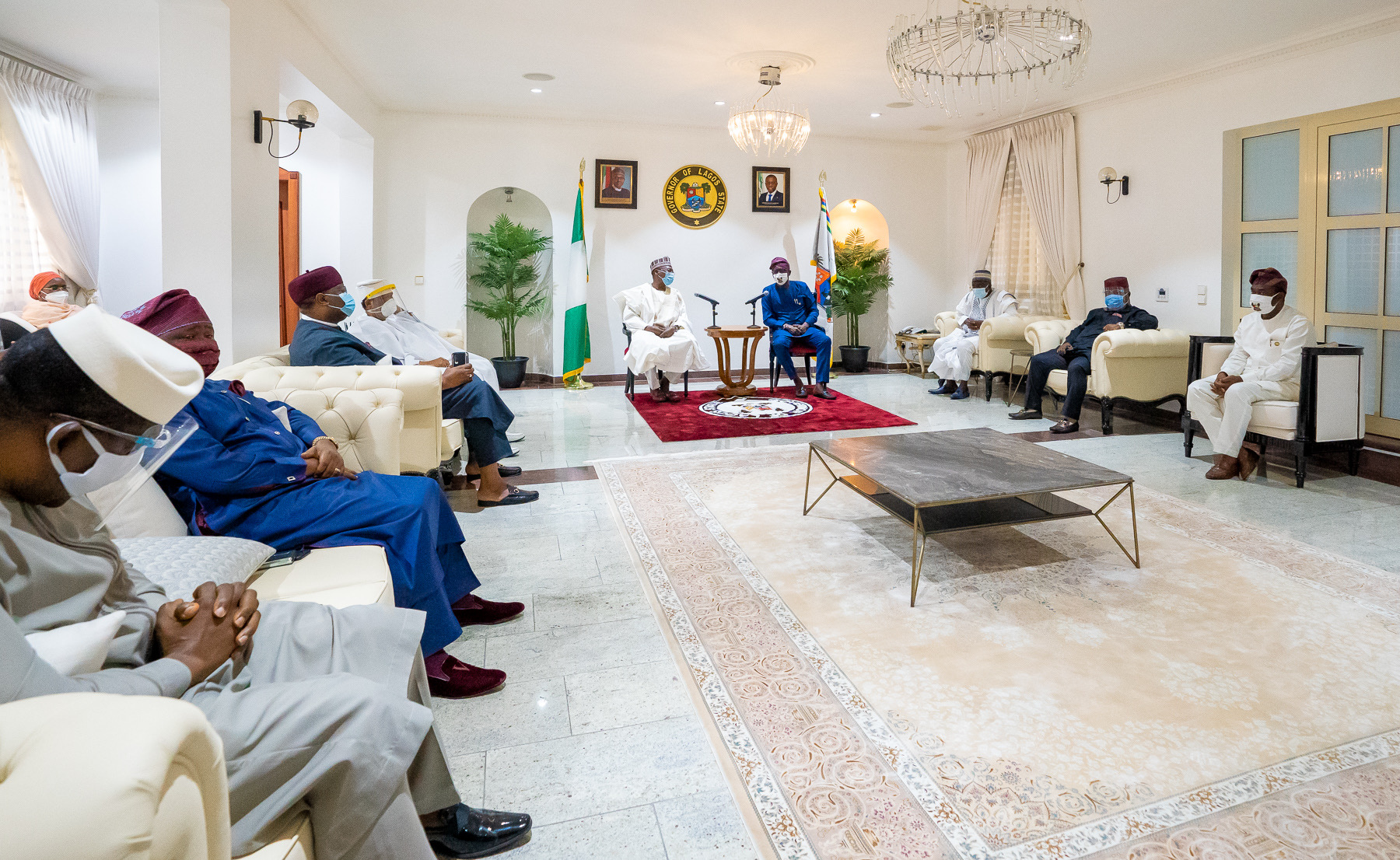 L-R: Senator Opeyemi Bamidele; Senator Solomon Adeola; Sen. Tolulope Odebiyi; Senator Ajayi Borrofice; Senate Majority Leader, Sen. Abdullahi Yahaya; Lagos State Governor, Mr. Babajide Sanwo-Olu; Sen. Ibrahim Oloriegbe; Sen. Sandy Ojang Onor and Deputy Governor, Dr. Obafemi Hamzat during a commiseration visit to the State Government on demise of Senator Bayo Osinowo by the Senate delegation at Lagos House, Marina, on Friday, July 3, 2020
….Senate To Honour Late Lawmaker Next Wednesday
Lagos State Governor, Mr. Babajide Sanwo-Olu, has said the last contribution made by the late Sen. Adebayo Osinowo, on the floor of the Senate in which the deceased expressed philosophical thoughts to galvanise federal lawmakers to support actions against the Coronavirus (COVID-19) pandemic, demonstrated his dedication to issues affecting people’s wellbeing.
The Governor said the late politician was passionate about the development of Nigeria and upliftment of the masses. The late Osinowo, Sanwo-Olu said, touched several lives in personal actions and through lawmaking.
The Governor spoke while receiving a Senate delegation constituted by the Senate President, Sen. Ahmad Lawan, to commiserate with the Government and the people of Lagos on the death of Osinowo, who, until his death on June 15, was the lawmaker representing Lagos East.
The delegation led by the Senate Majority Leader, Sen. Abdullahi Yahaya from Kebbi North, met with the Governor at the State House in Marina on Friday. The deceased’s eldest child, Dr. Tunde Osinowo, accompanied the delegation on the visit to the Governor.
The visit came ahead of a tribute session being organised by the Senate in honour of the late Osinowo, next Wednesday.
Sanwo-Olu hailed the Senate leadership for raising the “high-powered” delegation to condole the deceased’s family and people of the State.
He said: “The late Sen. Adebayo Osinowo was one of the finest and great politicians that Lagos has offered in service of Nigeria. He was a great mobiliser of men and minds. He was passionate about Nigeria and gave utmost dedication to the wellbeing of the people. While he served as lawmaker, both in Lagos and National Assembly, he touched so many lives and offered directions towards development.
“The philosophical thought he expressed in his last contribution to a debate on coronavirus on the floor of the Senate demonstrated how the late Osinowo took the issue of people’s welfare and national development. I commend the Senate President for sending a high-powered team to condole the Government and the people of Lagos. We will continue to sustain political legacies bequeathed to us by the late Osinowo.”
Sen. Yahaya observed that the Upper Chamber of the National Assembly had lost four members since the Ninth Senate took off.
The Senate Leader described the late Osinowo as a thoroughbred politician, saying his death was not only “great loss” to his constituents, but also the nation.
Yahaya said Osinowo’s last contribution to the debate on Coronavirus was moving, disclosing that the Senate would fully honour the late politician at a special session to be held next Wednesday in Abuja.
Other members of the Senate’s delegation include Sen. Ajayi Borrofice, Sen. Tolulope Odebiyi (Ogun West), Sen. Solomon Olamilekan Adeola (Lagos West), Sen. Opeyemi Bamidele (Ekiti Central), Sen. Ibrahim Oloriegbe (Kwara Central), and Sen. Sandy Ojang Onor (Cross River Central).
Post Views: 797