***As Heir To The Throne Of Oduduwa  Arrives From Olori Naomi

In the past, there had been speculations about Olori Naomi welcoming her first baby for Ooni Adeyeye Ogunwusi.

The speculation had been quashed by the Director of Media and Public Affairs to the Palace, Moses Olafare.

However, this time, it is the truth, as the queen welcomed a baby boy in the early hours of Wednesday, 18th November.

The news was announced by the Ooni himself on his Instagram page.

He wrote, ‘To God be the glory great things he has done. Hearty congratulations to the entire House of Oduduwa and Olori Silekunola who today birthed a Prince to the Royal throne of Oduduwa. Mother and child are doing well to the glory of God Almighty.’ 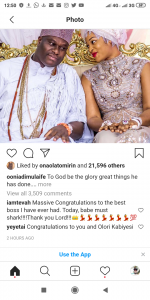