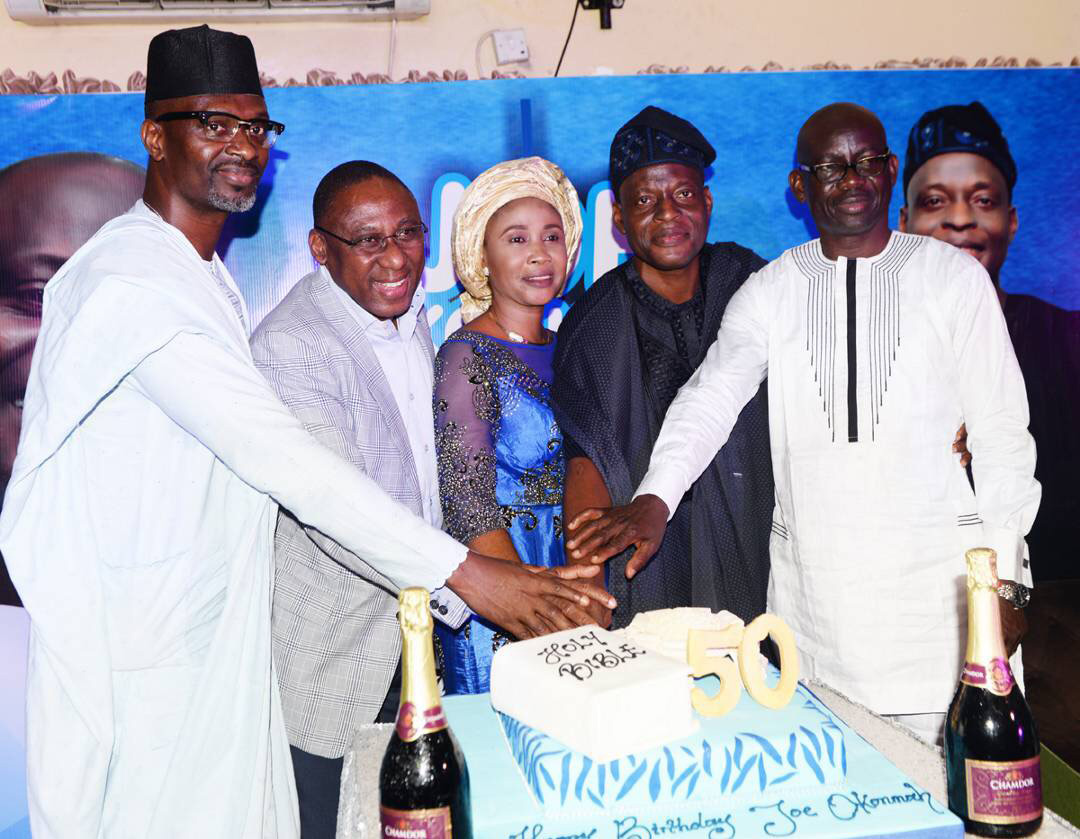 The Account Director of TPT International, Mr. Joseph Okonmah, FNIPR, who recently marked his 50th birthday in grand style at the White House Hotel in Lagos, has unveiled the Joe Okonmah Foundation to help the less privileged.

The former Area Commander of National Drug Law Enforcement Agency (NDLEA), Apapa Wharf and Zuru Area Comnands and Head, Corporate Affairs, Dangote Group stated that it was God who has been watching over him and preserving his entire household.

Indeed it was an evening of merriment as friends gathered around him to share joyful moments of childhood days and the present, testifying to the deeds and initiatives embarked upon by Okonmah.

Speaking at the ceremony, Okonmah who is a pastor in Foursquare Gospel Church, said “as a way of saying thank you to God, my wife and I have decided to institute Joe Okonmah Foundation to support the underprivileged on annual basis, because we are ‘products’ of God’s grace, mercy and love. This foundation will be supporting the needy by way of business funding and scholarship.”

Also as part of efforts in supporting Nigerians through the Foundation, two beneficiaries, Modupeola Adesina and Dauntless Chima Emmanuel, were supported with funds to help enhance their businesses.

In her remark, Mrs. Shalom Okonmah, the celebrant’s wife concluded that whatsoever a man is. What matters is where you will spend your eternity. She asked a question, are you heavenly conscious? This she asserted is the most important thing.

In his speech, Mr. Taiye Ajiyen, the Personal Assistant to the Chairman, Dangote Group, Alhaji Aliko Dangote, who represented him, stated that Okonmah is a man of exemplary character who has worked effortlessly to ensure fair play and accountability at Dangote Group when he steered the affairs of the corporate division.

He read an extract from Dangote’s speech which states “you have proven to be a man of honour and distinction and I am convinced that your varied and excellent life experiences will spur you to continue in your service to humanity and fatherland. I trust you are already a role model to many Nigerians and l truly expects that the younger generation will take a cue from your sterling qualities to improve the social and economic lives in our great country.”

There were also short exhortation from Pastor Tunji Abegunde, Zonal Superintendent of Foursquare Gospel Church, Magboro Zone, who extolled God for preserving Okonmah and his family despite the hurdles in life.

In his goodwill message, Pastor Eniola Netufo, Zonal Superintendent of Foursquare Gospel Church, Alamo Zone, said the celebrant is a good fighter. “Once convinced in a project, he will be the first to champion it, even though contrary to his initial position,” Netufo stated.

He however prayed that God should lift him up to higher leadership position in Nigeria.

Prince Tunde Adesanya, a childhood friend of the celebrant told the gathering of how they played the childhood pranks and how they started thinking purposely, that God has been so faithful in guiding them through life trials and challenges.

Dr. Rotimi Oladele, President of Nigerian Institute of Public Relations (NIPR) and Chairman Governing Council acknowledged the contributions of the celebrant as a former chairman of NIPR, Lagos, and Fellow of the Institute.

Mrs. Nkechi Ali Balogun spoke eloquently of the celebrant as a brother who is loyal with a forgiving heart. She prayed that God will continue to uphold him and his household. Not left out was Surveyor Tope Ojo, a childhood friend of Okonmah, who narrated their quest to excel in life and they recorded failures in two attempts in the West African Examination Council (WAEC) examinations. He said they had to encourage themselves and now they are forging on to the glory of God.

An indigene of Illah, Delta State, Okonmah is a graduate of Political Science and Public Administration from the University of Benin; holds M.Sc. Degree in Political Science from the University of Lagos; Bachelor of Letters of Law (LLB) from University of Lagos and Barrister At Law (BL) from the Nigerian Law School, Lagos; as well as Bachelor of Theology, Pastoral Studies from the prestigious LIFE Theological Seminary, Ikorodu, Lagos. He also has a post-graduate degree in Public Relations from the Nigerian Institute of Journalism (NIJ). He is a Fellow of NIPR and member of several professional bodies.