Arole Oodua & Ooni of Ife,Ooni Adeyeye Enitan Ogunwusi Ojaja II has called for calm over the recent court judgement in favour of Aga ruling house against Ajagbusi ruling house about the stool of the Obalufe of Iremo in Ife being occupied by Oba Idowu Adediwura. 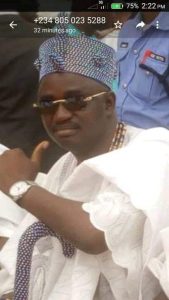 In a statement by the Ooni’s Director of Media and Public Affairs, Comrade Moses Olafare, Ooni Ogunwusi described the matter at hand as a pure family affair, saying both the plaintiffs and defendants are members of same big family in Iremo quarters of Ife. He commended concerned parties for their peaceful approach and maturity as they legitimately presented their cases at the court of law saying the status quo shall remain with Adediwura as Obalufe till the final judgement is made.

The highly revered monarch who called for calm over the matter described peace as an important tool towards the creation of a developed society, he urged all concerned parties to refrain from words and actions that could be misunderstood by their followers.

“we must place the interest of Ile Ife above any selfish interest and also be upright in our dealings.

“Nigerians have the right to take any issue to court to seek clarifications and the Ooni commends those involved for lawfully presenting their cases legitimately before a law court.

“While consultations are ongoing to resolve the matter out of court, all parties must however remain calm and obedient to the country’s judicial system.

“The Palace is aware of the recent court judgement as well as the appeal filed by the defendant against the pronouncement. These attest to the fact that it is an ongoing matter and we must treat it as such for we are all respecters of rule of law and the overall interest of the kingdom of Ife is paramount.

“Once we get to the end of all the court processes with the final verdict given by the Appeal court, the Ooni with not hesitate to do the needful.

“In this regard, the complaint and the defendant must continue to show their utmost loyalty to the kingdom of Ife by shunning actions and utterances that are capable of misleading the public.

Serious efforts are being made by the Ooni-in-council and leaders of Ife to resolve the dispute amicably.

Arole Oodua as the father of all has the capacity to bring everybody on board for the development of Ife land and her people that is why he is reaching out to his subjects wherever and however to pacify all parties in dispute.

It will be recalled that an Osun state high court had last week ruled in its judgment asked the Ooni of Ife to remove Oba Idowu Adediwura from Ajagbusi ruling house as the Obalufe of Iremo-Ife. The embattled Iremo-Ife monarch has since taken the matter to the court of appeal.