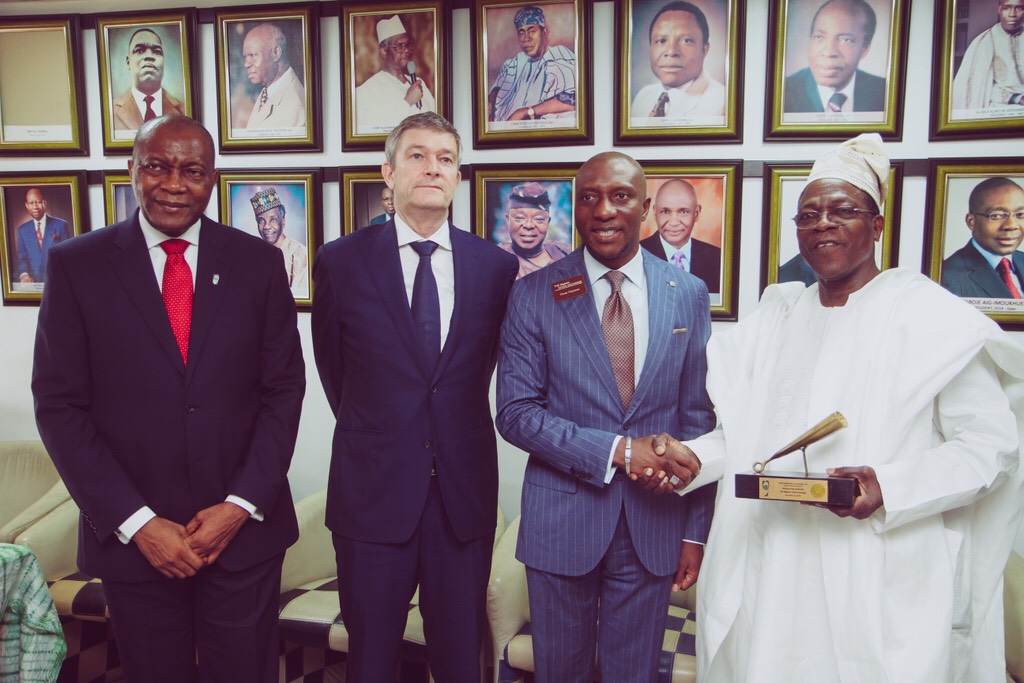 The Chief Executive Officer of The Nigerian Stock Exchange, NSE, Mr. Oscar Onyema has commended Nigerian Breweries Plc for her commitment to corporate governance standards. The NSE CEO made this commendation when the management of Nigerian Breweries Plc visited the Exchange for the closing gong ceremony on Wednesday in Lagos.

Speaking during the visit, Onyema congratulated the company on its 70th anniversary and for winning the Most Compliant Listed Company award for the year. He described the company as a good corporate citizen which has shown good example to other listed company companies on the Exchange.

The Most Compliant Listed Company award is given by The NSE to a company that demonstrates the highest degree of compliance with the rules and regulations regarding disclosure obligations of listed companies to on the exchange in a particular year.

Onyema noted that as CEO of the Exchange, part of his agenda is to consolidate his relationship with quoted companies on the Exchange and to ensure the Exchange continues to be a more robust platform that will attract the confidence of local and foreign investors. He also explained that Nigerian Breweries was qualified to join the Exchange’s Premium Board, the listing segment for the elite group of issuers that meet the Exchange’s most stringent corporate governance and listing standards.

In his remark, Chairman of Nigerian Breweries Plc, Chief Kola Jamodu, who led the management team of the company to the Exchange, in his remark, lauded Onyema for his development strides since he assumed office. He reiterated that corporate governance remains the only tool to increase the credibility of The Exchange and urged The NSE to continue with improvements in that regard.

Jamodu intimated the CEO and his team that Nigerian Breweries has grown from its humble beginnings as a company that started 70 years ago with one brewery to eleven breweries spread across the country. He disclosed that the company has over 4000 workers in its direct employment and is also one of the highest dividend paying entities with 120,000 shareholders.

He noted that the backward integration policy of the company has enabled it to engage over 250,000 farmers in its sorghum and cassava value chains, adding that this has gone a long way to provide jobs for the people.

The management team of Nigerian Breweries was later invited to the trading floor where Jamodu beat the gong to close the market for the day and later received the certificate of the Most Complaint Company Award from Mr. Onyema.

Nigerian Breweries Plc has consistently been honoured with awards relating to the capital market including The NSE President’s Merit Award in the Brewery sector, The NSE Quoted Company of the Year Award and The NSE CEO’s Distinguished Award for Compliance.