A notorious cultist and robber famed for repeatedly raping a 16-year-old girl in Warri, Delta State, has been reportedly killed during a cult clash.

This was disclosed by human rights activist, Comrade Israel Joe on Monday, May 10.

According to him, the criminal had last September, abducted the teenage mother at gunpoint and repeatedly raped her in his house.

According to the activist, the girl was later rescued and the suspect arrested by the police. He was transferred to the Delta State Police Command where he was later granted bail instead of being remanded in prison.

How many of you remembered the story I posted here on the 15th of September last year, how a girl was constantly raped into pregnancy by an alleged cultist, kidnapper and armed robber, who brought gun to the house of the girl, bailed up the mother and carry the child to his house in his Keke to rape her all the time?

I told the mother to dive the boy along with the gun and raise an alarm which she did until people came to her rescue and the boy was arrested to Enerhen Police station.

We insisted and he was transferred to Delta State Police Command Headquarters Asaba. The police were later compromised and even with the gun, granted bail to him instead of remanding him to Okere prison.

The police were asking who snapped him with the gun just because monies exchanged hands even with the testimony of the girl and mother, justice was denied.

We had quickly got a link and sent the girl on the pics above out of Nigeria while the child remained with her mother until she would have her papers and come pick the child.

The moment the guy returned from Asaba, he committed more heinous crimes and led his cult group in killing others in their inter cult clash. Some weeks ago, this same guy was also killed and his body butchered into pieces at Udu.

He met his match for all the pain he made this little girl went through. He caused untold High Blood pressure for the mother and the girl. Obviously he was cursed and he walked into his death. If the police had sent him to jail, he probably would be alive today but his evils pushed him into his victorious fall. Rest in Hell. 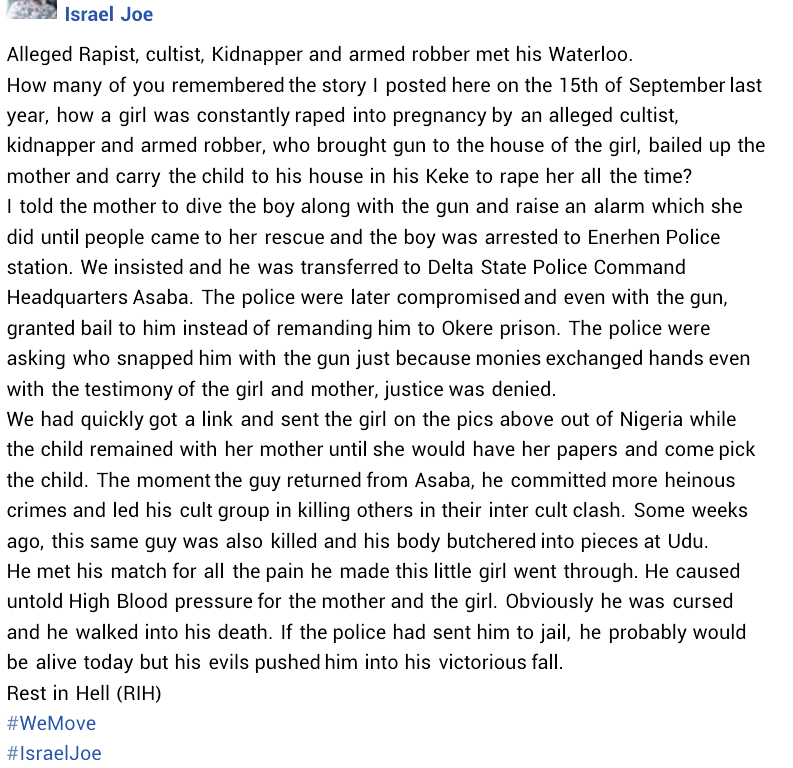