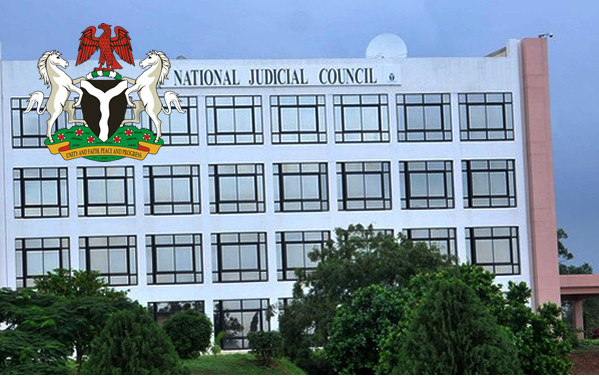 A letter of warning has been issued to two judges by the National Judicial Council (NJC). The council also placed one of them on the ‘watch list’.

This disclosure was made by Soji Oye, the Director of Information at the NJC. According to him, the letters were issued on Wednesday, March 16.

The NJC has also recommended the appointment of six heads of court and nine judicial officers for the Federal and State High Courts, Sharia Court, and Customary Court of Appeal.

NJC recommends appointment of Six Heads of Court and Nine Judicial Officers for the Federal and State High Courts, Sharia Court and Customary Court of Appeal

The National Judicial Council under the Chairmanship of Hon. Dr. Justice I. T. Muhammad, CFR, at its 97th Meeting held on 15 and 16 March 2022 resolved to issue warning letters to two Judicial Officers of the Federal and State High Court.
Hon. Justice Muawiyah Baba Idris of the High Court of the Federal Capital Territory Abuja was issued a warning letter and placed on Council’s “Watch List” for a period of one year for signing the Writ of Possession for execution on the same day he delivered judgement in Suit No. FCT/HC/CV/FT/36/19 between Sicons Nigeria Ltd V Nile Place Restaurant and Catering Services Ltd. The Suit was for recovery of demised property.
Council agreed with the findings of the Committee that investigated the Hon. Judge that his action was in contravention of Proviso to Order 27 Rule (16) (b) High Court of the Federal Capital Territory Civil Procedure Rules 2018 and Order 4 (1) and (2) of the Judgement Enforcement Rules 2004.
Council also resolved to issue a warning letter to Hon. Justice M. M. Ladan of the High Court of Kaduna State having found merit in the petition written against him in Suit No. KDH/KAD/1321/2018 between VTLS Inc. Vs Ahmadu Bello University.
He signed the Writ of Attachment while the Garnishee Order Nisi was pending.
Council at the meeting considered the list of candidates presented by its Interview Committee and at the end of deliberation, Council recommended the under-listed names of Fifteen (15) successful candidates as Heads of Courts and other Judicial Officers in Nigeria.
They are as follows:
1. CHIEF JUDGE, PLATEAU STATE
i) Hon. Justice David Gwong Mann

10. ONE (1) JUDGE, CUSTOMARY COURT OF APPEAL, TARABA
i) Bulus Samuelson Nyiputen
All recommended candidates are expected to be sworn-in after approval by the President, Muhammadu Buhari, GCFR and their respective State Governors and confirmation by the National Assembly and the respective State House of Assemblies as the case may be.
The Members also considered the reports of various Committees and noted the notification of retirements of 23 Judicial Officers of the Federal and State Courts and notification of death of one State High Court Judge.