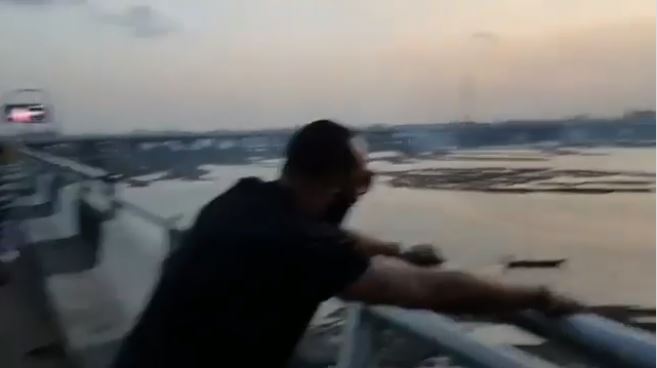 Singer, KCee, might just have emerged the first musician to take his reaction to President Muhammad Buhari  comments about Nigerian youths to the hight.

President Buhari had been quoted saying that Nigerian youths are lazy and don’t like to work.

Reacting to the comment, KCee took to the Third Mainland Bride in Lagos state to vent his anger about the0 President’s comment.

Further he said “Do you want me to kill myself before you acknowledge us. No no we deserve some accolade, how can you tell us we don’t deserve an accolade.”

President Buhari has been severally criticized for his comment on Nigerian youths leading to a reaction from the Presidency saying that “every country has its own share of idle population.”

Special adviser to the president on media and publicity, Mr. Femi Adesina, in a statement released to journalists on Thursday, April 19th said the President’s comments about Nigerians youths being ‘lazy’ did not apply to all Nigerian youths.

He said, “Indeed, every country has its share of idle population, and it is the bounden duty of government at all levels, to create an enabling environment for them to actualize their potentials. That is what President Buhari is committed to doing.”

“Responding to a question, President Buhari had cause to talk about some Nigerian youths, and he said: “We have a very young population; our population is estimated conservatively to be 180 million. More than 60 percent of the population is below the age of 30. A lot of them have not been to school and they are claiming that Nigeria has been an oil producing country, therefore they should sit and do nothing and get housing, healthcare, and education free.”

Mr. Adesina, however, said that the storm over the President’s comment was the handiwork of   “manipulators and twisters.”

“Typical of their stock in trade, manipulators, and twisters of statements of Mr. President, who lie in wait to make mischief, interpreted the comment to mean that President Buhari had taken all Nigerian youths to the cleaners.

“But elementary English recognizes a wide gulf between “a lot of” and the word “all.” How can “a lot of them,” suddenly transmogrify to mean “all of them?” Mischievous and unconscionable! There is no way President Buhari, father of the Nigerian nation in every sense of the word, who equally has biological children of his own in the youths age bracket, pass a vote of no confidence on all youths. It can only exist in the imagination of those who play what the President has described as “irresponsible politics” with everything.”