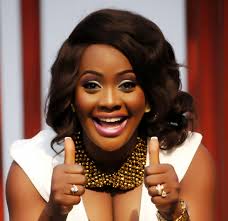 Versatile female entertainer, Helen Paul has been announced as the new ‘Face of the Telecom Consumer’ by the Nigerian Communications Commission, NCC. She signed the contract yesterday, Wednesday, March 15, at the commission’s head office in Abuja.
A statement from the NCC reads that “Helen Paul, the renowned comedian and actress who also signed on alongside Ali Nuhu as the NCC’s Face of the Telecom Consumer, visited the Commission’s Head Office in Abuja today (Wednesday) where she met the Executive Vice Chairman of the NCC, Prof. Umar Garba Danbatta and other members of the Management team.
“By these engagements, both Ali and Helen will now feature in handbills, flyers, banners, posters, TV appearances, radio jingles, as well as on memorabilia and other iconography materials designed by the Commission for its series of activities scheduled to sensitize and celebrate the telecom consumers as the most central stakeholders of the telecommunications industry in Nigeria.”
The non-exclusive contract flagged-off the “Year of the Telecom Consumer” Campaign in Abuja, which coincided with the global celebration of World Consumer Rights Day.

In a chat, Helen said “I feel so honoured. It is a trust reposed on me by the management of NCC, and I promise not to disappoint them. I give thanks to God and my fans for their unflinching support.”

See Who Jose Mourinho Wants To Sign At All Cost (Photo)