Atiku Abubakar, a presidential candidate of the People’s Democratic Party (PDP), in the last presidential election has reacted to the death of Nudubuisi Kanu, a former administrator of Lagos State. 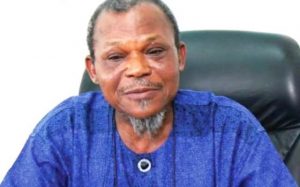 Abubakar’s reaction came in a condolence message on Thursday, January 14, via Twitter.

Condoling with the family and friends of the ex-military governor of Lagos, the former vice president described Kanu as an outstanding soldier and activist.

Atikue said the former military officer contributed tremendously in ousting the military and ushering in the democracy that the country enjoys presently.

The politician stated that Kanu, who also served as a military administrator in Imo state will be missed.

His words: “Rear Admiral Ndubuisi Kanu was an outstanding soldier and administrator of Imo and Lagos. But his most defining work was as an activist who contributed tremendously in ousting the military and ushering in the democracy that we enjoy today. He will be sorely missed.”

“On behalf of my family, I convey my deepest condolences to his family and the government and people of Imo and Lagos that he served with distinction. May his soul rest in peace.” Kanu reportedly died on Wednesday, January 13, after a brief illness.