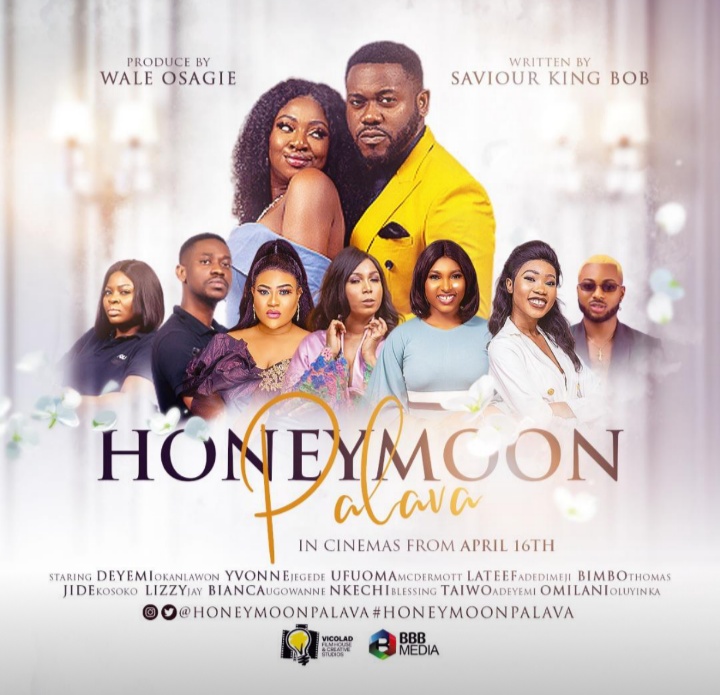 Nollywood Star Actress Yvonne Jegede commends fans’ favourite Actor Deyemi Okanlawon for his bravery and commitment to art as he went all out in the upcoming Nollywood movie titled Honeymoon Palava set to hit the cinemas from April 30, 2021.

Last week, a clip surfaced online where Deyemi came out of the bathroom naked while acting a scene alongside Yvonne Jegede and Adebola Adeyela (Lizzy Jay) in Honeymoon Palava. The video generated reaction with some people saying Deyemi went too far as a married man.

Yvonne said in a statement that the reaction the almost naked footage has caused is unnecessary as Deyemi is just acting.

‘Deyemi is an actor. He interprets roles. He is acting coming out of the bathroom after a warm bath, do people expect him to come out fully kitted? This is a movie, it is make believe. He is acting and committed to his arts. Arts are real, so acting should be closed to reality. I will instead commend him for being a very good actor and a good professional’.

Honeymoon Palava tells the story of a new couple who got caught up in a nightmarish series of events 48 hours after their wedding in a hotel with Deyemi Okanlawon and Yvonne Jegede playing the roles of the newlyweds.

Yvonne Jegede who is a graduate of the University of Cyprus aside being an actress is a movie producer, a TV Personality and a model. She has starred in box office hits such as 10 Days In Sun City, Okafor’s Law from Omoni Oboli, Husbands of Lagos among others.

Speaking on her role in Honeymoon Palava, Yvonne Jegede said ‘’I’m excited about this film as I got to play a key role alongside Deyemi Okanlawon. What people out there don’t know is that Deyemi is not just a fantastic actor; he is also a good friend of mine so it was easy to interpret our lines well and nail it! Acting alongside Deyemi brought out the best in me, I can’t even talk about the part in the movie where he came out of the bedroom naked and I literally froze while on that set. I can’t give a detailed account of the movie except you guys go and see it when it gets to the cinema’’.

‘’Aside acting alongside Deyemi, I can’t tell you how happy I was to share that set with Ufuoma Mcdermott who is a superstar any day. The casting for the movie was top notch as Prince Jide Kosoko, Lateef Adedimeji, Bimbo Thomas, Nkechi Blessing and others all brought their A-game to that set’’ Yvonne said.

Honeymoon Palava is the production of Vicolad Studios (owners of Vicolad Cinemas) and BBB Media.

9ice, Reminisce, DJ Neptune For The Premiere Of Mimi