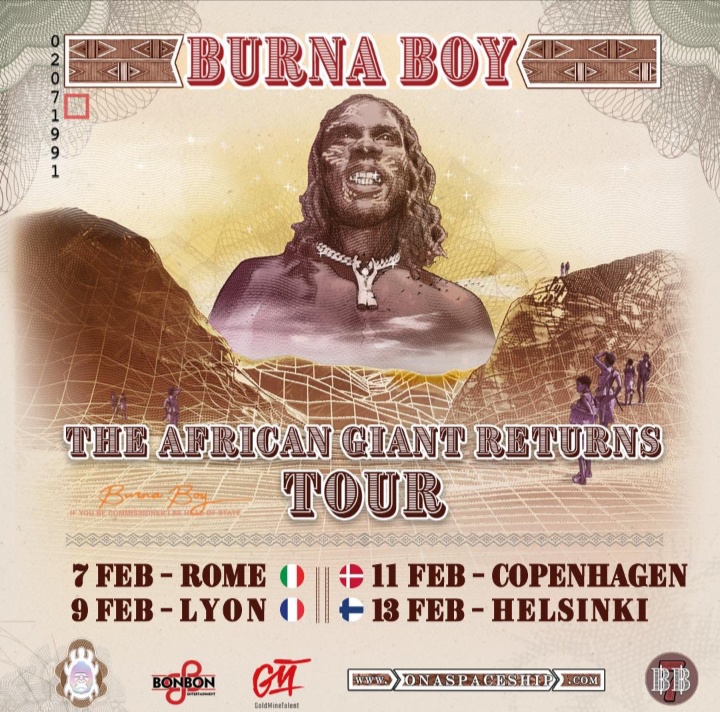 Fans of Burna Boy around the world have reacted with excitement to his “African Giant Returns Tour”, as they anticipate the show.

The “African Giant Returns Tour”, a concert of four cities is themed after the singer’s last album which has been described as a successful body of work.

The tour which will span between February 7 and 13, will see the ‘Ye’ singer performing in Italy, France, Finland and Denmark. The Afro-fushion singer will be on stage in Rome, Italy on February 7.

On February 9, Lyon, France will be on fire, as Burna Boy hit the stage for the second phase of the show.

The tour continues in Copenhagen, Denmark with Burna Boy performing on February 11, while he closes the tour with a final performance in Helsinki, Finland on February 13.

“The African Giant Returns Tour” is a sequel to Burna Boy’s ‘African Giant Tour’ which held in the United Kingdom with a show in Conchobar, London on Sunday, November 3, 2019.

The United Kingdom show followed the success of the same concert in America which saw the Afro-fusion artiste lighting up Coachella.

The four-nation tour is supported by

See Why Rapper MI Decided Not To Have Children