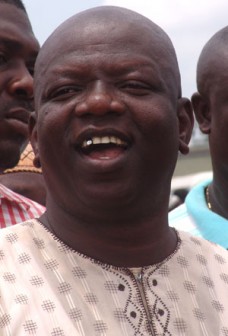 In his favoured days, Alhaji Rafiu Akanni Olohunwa was the darling of Fuji musicians, actresses and praise singers alike.

His presence at the event of any of the aforementioned categories of people meant a rain of Naira notes on that night.

Just as women fought for his attention, so did men too, as the dark-complexioned man who reside in Chevron Estate, Lekki, Lagos was simply a cheerful giver and a lover of all.

Men and women in need of his favour stormed either his house or monitored his personal assistant to know where to meet up with him, and did he sort their problems, yes he always did.

However, all those are in the past now, as the popular musicians including Pasuma, Malaika and Saheed Osupa have all distanced themselves from the man since he was alleged of murder.

Olohunwa was arrested and paraded having been alleged of being the one who hired the services of notorious assassin Ade Lawyer to eliminate the Chairman of the Idumota branch of the National Union of Road Transport Workers (NURTW), Kunle Poly.

Trouble however started when the assassin who was initially paid half a million killed the wrong person and insisted on collecting his balance of a million Naira. The inability of his alleged principle to balance up saw his Sport Utility Vehicle being seized by the assassin. Efforts to recover the auto led to the involvement of the police who subsequently arrested Ade Lawyer leading to his confession of several murders.

Interestingly, since the arrest of Olohunwa no musician, actress or actor  has held brief for him.