The President of the united states, Donald Trump has made history as the first President to be impeached twice in America, this is of course not a good record to be proud of.

He was first impeached in 2020 but was saved, and this time around, he has been impeached again, who knows if he will be saved again? Because even his party members were part of those who voted for his impeachment.

Surprisingly, everything happening in the political situation of the United states can be seen as the fulfilment of Gods word from the mouth of one of his vessels, Primate Elijah Ayodele. 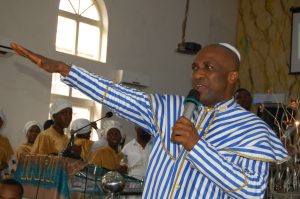 Primate Ayodele during a church service

Among other accurate prophecies, the popular man of God has said so many things about the last days of Donald Trump. The latest one happened seven days ago, the man of God made it known that God has rejected the administration of Donald Trump and no matter what, He will leave Government in shame.

‘“God wants to push Donald Trump out of government. No matter what he does to cause destruction in America and the world, God has rejected Trump. He will go in shame, this is the word of the Lord’’ (Culled from Daily post)

With the impeachment yesterday, the many bans placed on him by social media pages, has this prophecy not been fulfilled already?

Amotekun Only Way To Solve Insecurity Challenges In Nigeria-Makinde