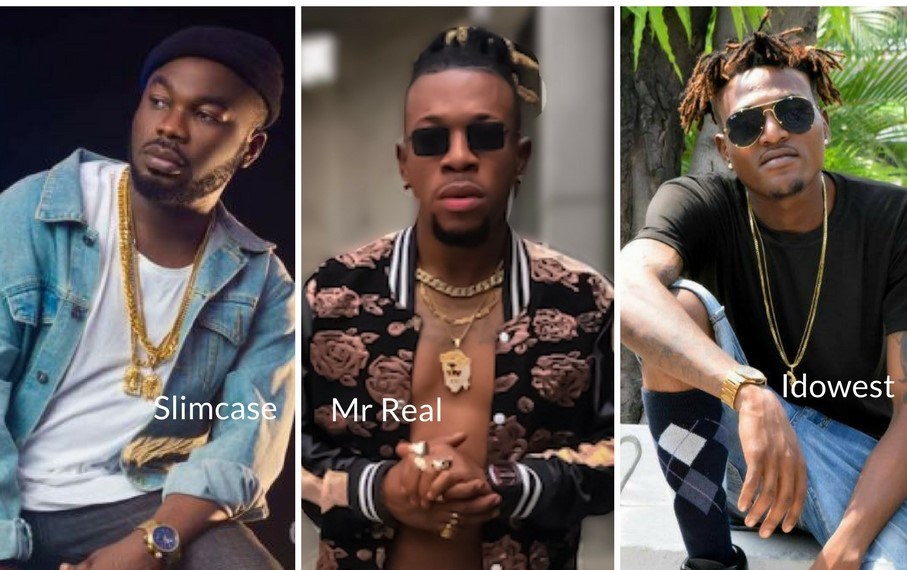 For a while, street music in Nigeria has been dominated by names such as Olamide, Reminisce, Small Doctor, CDQ and several others.

However, a new crop of music acts from the streets with unique rap punch lines and vibes have been surfacing.

From Idowest to MZ Kiss and the more successful Mr. Real and Slimcase.

While these acts might be fast emerging, they have been garnering immense fans with some of them receiving great review.

MZ Kiss is considered a street queen in her own right, and is fast garnering fans. Known for songs such as ‘Owo Meta’, ‘Merule’, ‘Fuji’, ‘Last Year’ and more recently ‘Wawu’ and ‘Ijo’ produced by Tiwezi; the rapper recently showcased her skills in ‘Shempe’ a DJ Xclusive collaboration, also featuring Slimcase.

Mr. Real, Idowest and Slimcase are presently rubbing shoulders, as the future kings of the street.

With ‘Legbegbe’, a song inspired by movie producer Seun Egbegbe, Mr. Real, took over the music scene. Now, no street or hood party is complete without the song ‘Legbegbe’. Once considered exclusively for the uncultured, ‘Legbegbe’ is now accepted among some street oriented elites.

While Mr. Real’s music efforts might be limited to various versions of the song ‘Legbegbe’, other songs that have enjoyed his touch are collaborations including ‘Kunta Kunte’ with Small Doctor.

Idowest, like Mr. Real enjoys a lot of applause and rotation from DJs with the song ‘Shepeteri’.

Slimcase is also not left out. His joints include ‘Maje Omo’, ‘Bend Down’, ‘First’, ‘Industry OT’ among others. Like Idowest and Mr. Real, Slimcase is presently a sensation with his unclear voice announcing Saint Sami Ganja before any song.

2018 Headies: Did Mayorkun Deserve ‘Next Rated?’