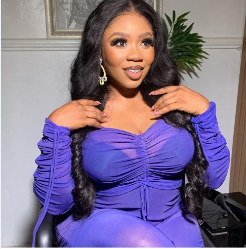 Actress, Wunmi Toriola, has confirmed the end of her marriage of three years.

Speaking on the circumstances behind the crash of her marriage, the actress explained that her marriage ended over a year ago.

She also disputed allegations that she was violent in her marriage.

Recall that the actress who has a son with her husband got married to her America-based man on May 13, 2018. Related Topics:'Its Over'; Actress Wunmi Toriola Confirms End of Her MarriageWumi Toriola
Up Next

Hold On To Your Partner, Nothing On The Streets-Vee Iye

I Will Learn Anything To Please My Man-Rosy Meurer