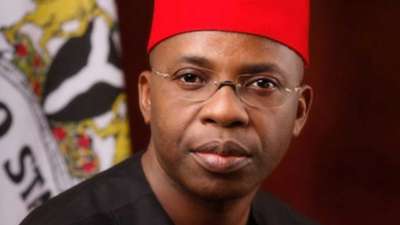 A campaign of calumny has been launched against businessman and a former governor of Imo State, Ikedi Ohakim.

Ohakim maintains that his detractor is Chinyere Amuchienwa is a luxury item dealer resident in Lagos State.

The lady is claiming that she needs to be paid money collected from her and for items bought on credit by Ohakim, while the former number one citizen of Imo State has claimed a threat to his life by Amuchienwa.

While the details of what might be between the duo seem messy, it is obvious that in his dealing with Amuchienwa, Ohakim forgot the wise words of American Author, E.A Bucchianeri: “Be wise today so you don’t cry tomorrow.”

Presently, his focus will be on image laundering as questions of how a married grandfather got himself mixed up in such a peculiar mess are being asked
Post Views: 931

Oshiomhole Is Not My Godfather, He Is Working For Me-Ize-Iyamu