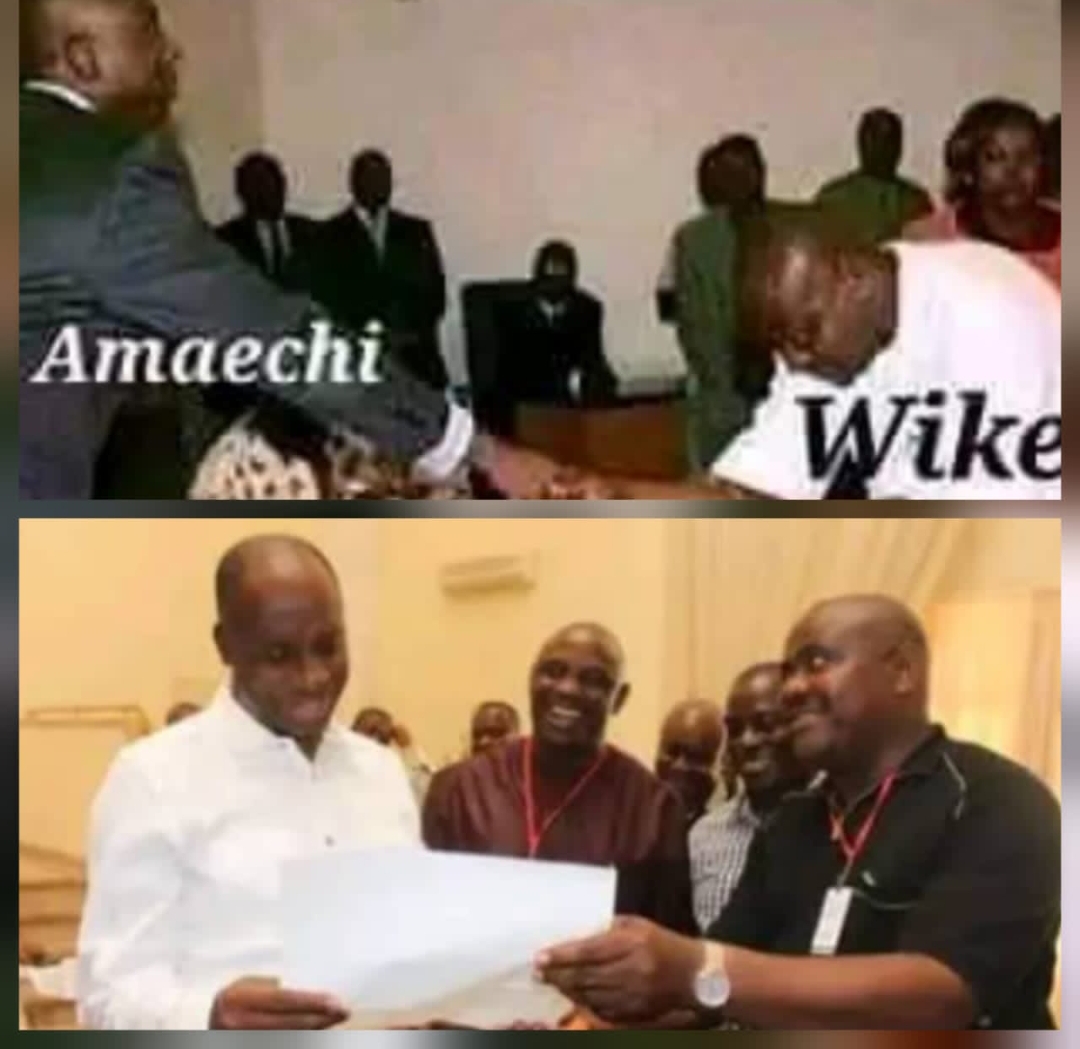 – Amaechi’s presence in the presidency restored the $10Bn NLNG Train 7 that Wike and his master (Jonathan) blocked;

– Has led to release of almost $400m of the $1Bn of the UNEP Fund to Ogoni that Wike and his master blocked;

– Brought back some oil wells Wike and his master ceded to other states;

– Brought back N78Bn of over N100Bn Rivers State used to execute federal project which Wike blocked.

The Governor who made the claim during the inauguration of the reconstructed former Riv-Bank Insurance building in Port Harcourt on Monday knocked the presidential aspirant stressing that a man who failed to attract projects to his state and had exhibited poor leadership within his party -the APC, should hide his face in shame and desist from talking about Rivers politics.

Wike was further quoted as saying that:-

“We have taken all your people. Nobody is at your party again. Why not manage and stay quiet; because of your poor leadership?

“Amaechi the former Minister is a total failure as far as Rivers State is concerned as he was unable to attract any meaningful project to the state in seven years while he served as a minister. Even what is supposed to come to us, you blocked it. Do you think you will not finish as a minister? You have left, I hear he can’t even enter the villa again”

Wike’s sustained bitter railing and condemnation was in reaction to comments by the former Minister that the Rivers State government ought to have given a state burial to late Chief Alabo Tonye Graham-Douglas, an elder statesman and former Minister of Petroleum Resources, who was laid to rest last Saturday.

The body of Late Elder Alabo Graham Douglas, the only Nigerian that was a four-time federal minister, was on Saturday lowered to mother earth at his hometown, Abonnema in Akuku Toru Local Government Area.

Amaechi, who attended the funeral wondered why the Rivers State Governor failed to attend the function. According to him the state government would have taken responsibility of the funeral going by the contributions of the deceased to the growth and development of Rivers State and Nigeria.

He noted that one did not need to be governor to be recognized, as the late Douglas played a significant role in the emergence of Rufus Ada George as governor of the state.

“Indeed going by the contributions he made to the state, I was thinking that the state would take responsibility for everything concerning Alabo. You don’t need to be governor to be recognised,” he said.

Reacting to the bitterly harsh and caustic criticism, Chief Eze, in a statement made available to media houses in Port Harcourt, said former Minister, Chibuike Rotimi Amaechi was very frank in his choice of words at Alabo’s burial, noting that his opinion represents the voice of Rivers people on the matter and wondered what could have caused Gov. Wike to be so crude and cynical in his use of vitriol words even though he is an avowed prattler and windbag.

According to Chief Eze, when he was confronted with the need of reacting to Wike’s vindictive comment, he was somewhat reluctant because discussing issues pertaining to Governor Nyesom Wike is becoming nauseating because the Governor himself is a nuisance.

“The more you talk the more he continue to embark on controversial issues even worse than the one you have addressed thereby showing that he is not interested either to repent or change but the issues he raised this time around, I have addressed most of them in the past particularly his inability to drown the APC Structure in Rivers State” the APC chieftain said.

Eze reiterated that the people of Rivers State know between Wike and Amaechi who did more as governor. He said Wike should note that Amaechi was not appointed the Minister of Rivers State but a minister supervising 36 states and FCT whereas as a Governor, one has just his state to administer. This notwithstanding, Amaechi’s inputs towards the emancipation and development of Rivers State is infectious and well recorded in my recent book on Amaechi and his legacies. Those in doubt, can order for a copy

“For avoidance of doubt, let me attempt to disabuse the minds of the public that may have been poisoned by Wike’s ungodly statement against a man without whom he would have been at the motor park where he rightly belongs.”

This notwithstanding, let us also assume that Amaechi did not contribute anything to the development of Rivers State but out of all the States in Nigeria the money amounting to a whopping sum of N78BN Amaechi saved for Rivers State was given to Governor Nyesom Wike which he looted through his half-kilometer overhead bridges which he brags as his signature project in this age of technology.

Amaechi is useless and a failure, we accept, but through him by 2015 Senator Magnus Abe, Senator Andrew Uchendu and a couple of Federal and State lawmakers were duly elected and we know the inputs these leaders made to the development of Rivers State.

The above doesn’t make any meaning? Ok. Through this failed leader, Dr. Dakuku Peterside, a great son of Rivers State was appointed the Director General of NIMASA and the magic he did, excelling under NIMASA will take twenty other Directors-General to achieve what he did. Many Rivers State sons and daughters are today working in NIMASA but Amaechi has not contributed anything to the development of Rivers State. No wahala, God dey!

Hon. Asita, another great son of Rivers State was appointed the Chairman of NIMASA Board through the instrumentality of the failed Amaechi

From 2015 till date, Dr. Davies Sonkote, Hon. Brown Onari were and are key players in NPA . Today through these great leaders, Amaechi influenced many sons and daughters of Rivers State to be employed in NPA.

Today, Hon. Odum Udi through the failed Amaechi is a Minister of the Federal Republic of Nigeria.

I learnt also that Alabo Sam Jaja whom he now worships as a god through the failed Amaechi is still a member of a Federal Board.

It is also on record that the following great sons of Rivers State Prince Chibudom Nwuche, Chief Victor Giadom, Hon. Aso Wenah, Fred Igwe, Dr. Lawrence Chuku and countless others due to the influence of the failed Amaechi are all members of one Federal Board or the other

The one that gives the Governor sleepless nights is Prof. Henry Ugboma, the CMD of UPTH, an unassuming and smooth operator who has employed more Rivers State sons and daughters than those employed within the seven miserable years of Gov Wike as Governor of Rivers State state.

Many people may not understand the special bond and relationship between Wike and I which causes me to weep most of the time whenever I listen to him speak in public functions. The fact remains that from the look of things either Gov Wike needs to go back to school to read and understand what true development means or those  crowding him should be bold enough to help him to understand that human development is the highest level of development in any given state which positions Amaechi ahead of him and those cheering him in his most despicable acts against humanity

Though, Gov. Wike doesn’t care about the employment and welfare of our people as he has succeeded in making Rivers State the Federal Capital of Youths Unemployment, but let me bring Wikes new Media Aide, Senibo Chris Finebone, to tackle him in other areas of development influenced by Amaechi.

According to my good friend, Senibo Chris Finebone, contrary to the claims by Wike, Amaechi attracted laudable projects to the state; “Amaechi was instrumental to the siting of the deep sea project in Bonny as well as the completion of the turn-around maintenance of the Port Harcourt International Airport.

Finebone, a Media turnaround expert further stated many projects Amaechi attracted to Rivers State as Minister, One of them is the Bonny Deep Sea Port by the APC-led federal government and preliminary work has started.

“That is the first deep sea port in Nigeria; that is a major project. It was when he was the Supervising Minister of Aviation, that the Port Harcourt Airport turn-around was completed.

“The Bodo-Bonny Road project was restarted after Amaechi joined the APC and that is why that road is seeing the light of the day. So, somehow, you will attribute that to him.”

Finebone further challenged Wike to present the projects he attracted to the state while serving as a member of the Federal Executive Council.

Finebone said: “Now, the question I am asking is what did Wike attract to Rivers State when he was Minister of State and later Supervising Minister? Nothing!”

In case Wike is not satisfied with Finebone’s inputs, let me highlight that Amaechi influenced the remittance of N78 billion to the administration of Gov  Wike. It was part of funds Amaechi spent on construction of federal roads during his time as governor of Rivers State.

He influenced the commencement of the Transportation University, Ubima, and attracted the Naval War College, Ubima.

He influenced the implementation of the UNEP report on Ogoniland; attracted key appointments to Rivers State; employment of hundreds of Rivers sons and daughters in the maritime industry as Seafarers, Safety Marshals etc, influenced the construction of an additional power plant in Afam power station.”

Let me conclude this statement by quoting Lady Oby Ndukwe an authority in the history and politics of Rivers State;

“Mediocrity is when people choose noise over substance. Celebrating a mini school over mega schools and a hospital over numerous hospitals. It is when a straight flyover is preferred to a modern interchange or bypass! When two sectors are hyped where several others are dead. When Songhai Farm is comatose and its assets sold.It is when old members are hungry and new members are cashing out, and the old members are clapping. It is when governance in a fallen economy is simplified. It’s truly an oxymoron!!!”

On Wike’s remark that Amaechi can no longer enter Aso Rock, the seat of power, Eze Congratulated Gov. Wike as the new Gateman of Aso Rock who determines who should enter Aso Rock and who should not. Let me counsel him In carrying out this new role, he should understand that Aso Rock is a public institution where any Nigerian is entitled to visit or enter once such a Nigerian has an assignment to carry out in the Seat of power. The public is very aware that if Amaechi has any business of visiting Aso Rock nobody çan prevent him from doing so including twenty of Wike and his cohorts.

Finally, for avoidance of doubt, let me highlight the following points:

– Amaechi’s presence in the presidency restored the $10Bn NLNG Train 7 that Wike and his master (Jonathan) blocked;

– Has led to release of almost $400m of the $1Bn of the UNEP Fund to Ogoni that Wike and his master blocked.

– Brought back some oil wells Wike and his master ceded to other states.

– Brought back N78Bn of over N100Bn Rivers State used to execute federal projects which Wike blocked.

Unless Wike is saying that all these projects are not sited in Rivers State.

You are now free to judge between Wike and Amaechi who is more relevant to the development of Rivers State.