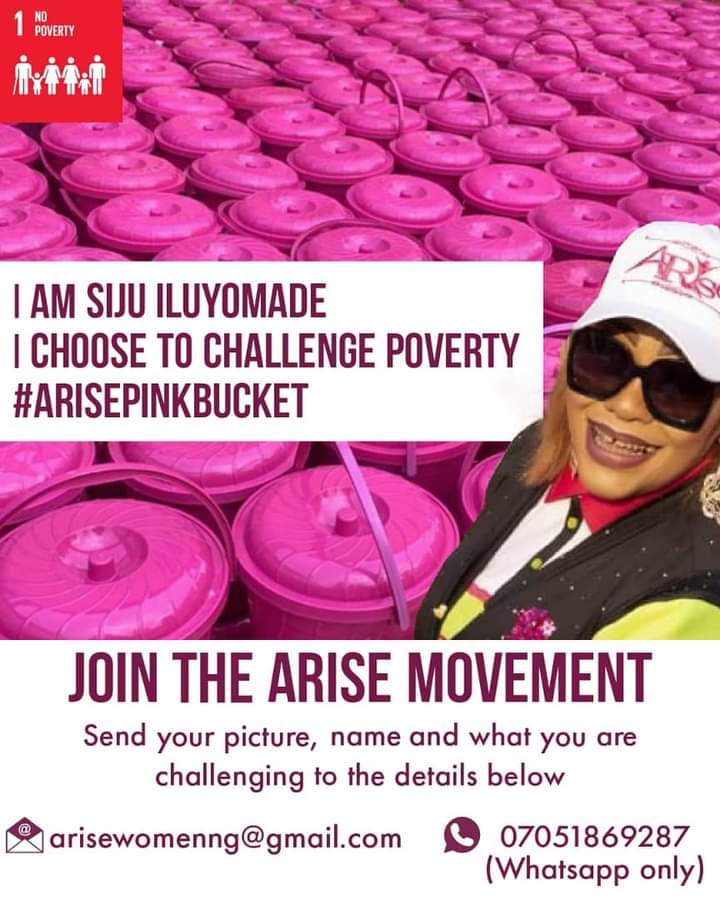 Convener of Arise Women, Dr Siju Iluyomade has urged women around the world particularly Africans to stand up against the scourge of poverty that has bedeviled the human and social economic growth of Nigeria as well as the continent.
In her Statement to encourage Women and commemorate the 2021 International Women’s Day, with the theme ‘Choose To Challenge’, Dr Siju has she is fondly called pointed out that “ gender inequality is one of the  problems that face every developing country in the 21st century and globally.  It is also a major cause of unemployment in Nigeria.
The latest data released on unemployment in Nigeria by the National Bureau of Statistics indicated that women ranked the highest when it comes to unemployment – The discrimination against women remains a common occurrence today and serves to hinder economic prosperity”.
Various indicators suggest that poverty is a major obstacle to Nigeria’s socio-economic development. Poverty has persisted and several interventions have failed to yield significant improvement in Nigeria’s Human Development Index even in periods of economic growth. Plagued with the challenges of unemployment crises, climate change, conflict, fragility and violence, Nigeria (the most populous country in Africa) stands at a grave risk if poverty is not tackled.
On efforts of Arise to improve on the lots of Women in the society, “Arise has set up several skill acquisition and empowerment programmes all across the nation to aid the Women and Girl child with adequate skills required to compete in the economic market and be gainfully employed”
While urging other corporate bodies to give more support to Women especially in Africa, the delectable philanthropist and lawyer of over 35years experience, further emphasized that education should be accessible to everyone irrespective of gender disclosing that Arise Women started equal educational projects in areas with the highest rate of illiteracy. According to her “ we have built a well equipped library in the Dafara Village, a suburb in Abuja under our adopt a village project. Primary and Secondary Schools have been built in Kobi and several other communities in Nigeria, all aimed at improving female literacy which is now among highest in West Africa”
She has also put rural women to work when it launches Arise Farmers’ Foundation, providing seedlings and facilitating smooth farming processes to improve government planned food sufficiency initiative.
The International Women’s Day is marked globally on every March 8th every year.
Post Views: 248