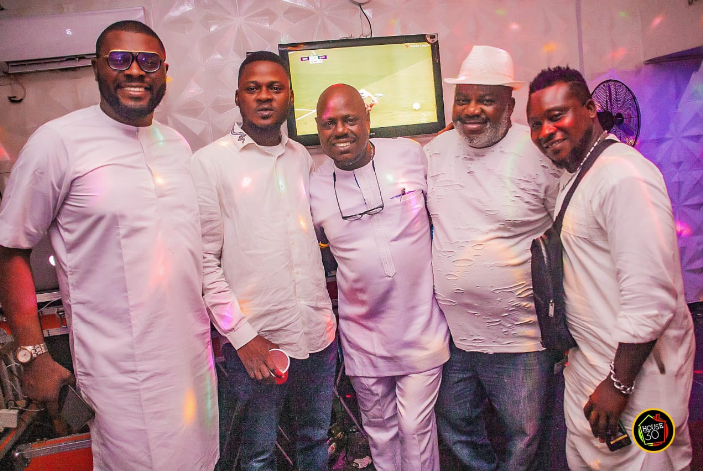 It was a night of glamour, pomp, and pageantry in the picturesque of Ikeja as some of the biggest boys and girls in Lagos gathered to celebrate House 30 Lounge’s fourth year anniversary. The all-white party affair which was held on 12 March 2022 took place at 30A, Aba Johnson Crescent, Akora Villa, Adeniyi Jones, Ikeja.

Speaking at the event, Showbiz guru, Akinwale Oluwaleimu, who is also a business associate with Seun Oshofisan on the House 30 project, said the anniversary was worth the celebration following their achievement in the last four years.

“First of all, let me start by saying, the idea to celebrate our 4th year in this business is not because we have too much money to throw around, no! We decided to celebrate four years of entertaining Lagosians, four years of giving our best of hospitality to people living in Ikeja and its locality. And you see, this won’t have been possible if our clients and customers didn’t trust us with their welfare”

“We consider their patronage an integral part of House 30 so we decided, it is important for us to celebrate ourselves. And trust me, this is just the beginning, it’s obviously going to get better, better, and better. And let me also use this opportunity to especially appreciate one of Nigeria’s premium drinks, Campari for standing by us in this time of celebration, and every other individual and organization” said Mr. Akinwale.

House 30 is a full-fledge hospitality firm, that has over the four years of opening served fun-loving Lagosians. Own and run by two creative, dedicated and hardworking Nigerians, Seun Oshofisan and his cousin, Akinwale Oluwaleimu who with over thirty years in the Nigerian entertainment scene, has not only made his mark but has contributed immensely towards the growth of several entertainers.

The likes of 2Baba, Wizkid, and many more have benefited from his wealth of creativity. It is worthy of note, Akinwale Oluwaleimu through his Event and Entertainment Consult Company has worked behind the scene for some of the biggest events in Nigeria today, some of which includes, Nigerian Entertainment Awards, Headies  Award, Ovation Carol, MEGA Awards, and many others.

Akinwale Oluwaleimu alongside his partner Seun Oshofisan (Oshopay) continues the development of the country, with the new opening of their 3rd House 30 and 4th Hotel this week, the duo is not ready to slow down in their quest to give Lagosians a value for their money.

Shocker: See What Koko Ita Giwa Is Wishing For