Ijaw Youths have condemned the unprovoked invasion of the palace of Ateke Tom, the Anyanabo of Okochiri Kingdom by police

In a statement signed by Pereotu Oweilaemi, the President of Ijaw Youth Council (IYC), he decried the situation. 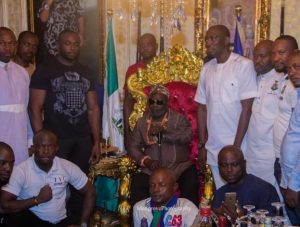 According to him, ‘the unprovoked invasion of the Palace of our revered King, His Royal Majesty, King Ateke Tom at Okochiri town in Rivers State by soldiers deployed on election duty. The said act of aggression is not only barbaric, it is sacrilege that should be condemned by every well meaning Nigerian’.

The statement went on to say:

IYC cannot comprehend why the Ijaw people are made the scapegoat of the FG Government’s desperation in deploying military to rig the elections? Only recently on 23rd of February, 2019, the Ijaw nation lost many of her promising youths to soldiers invasions in Rivers and Bayelsa states.

The invasions and ransacking of the house of the King is the worst form of atrocity committed against tradition our rich transition. The Ijaw nation, views the action of the marauding as a declaration of war against against us.

Faces Of Notorious Ilorin Criminals To Die By Hanging

Why AAC for Rivers Governor – Princewill