This follows the ministers gaffe at the burial ceremony of Chief of Army Staff, Ibrahim Attahiru and other military officers on Saturday May 22. 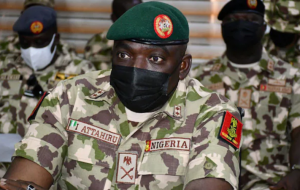 According to FFK, Magashi offered a “heartless felt condolence” to the families of the late military officers at the ceremony.

He described it as a “freudian slip”. The former minister who noted that the President was absent at the burial ceremony, also asked how “worse the show will get”.

He tweeted; “First our President refuses to attend the COAS’ burial even though he was in Abuja. The Minister of Defence was there & instead of talking sense he said he had “come to express” his “HEARTLESS felt condolences”. Talking about a Freudian slip!!! How much worse can this show get!”

Reno Omokri Criticises Buhari For Not Attending Burial Of COAS, Others