Tungba musician, Yinka Ayefele, has revealed that he never thought that his triplet would survive.

The 51 years old singer who welcomed his triplet premature on January 18, revealed this during a recent interview.

Ayefele said he denied reports of the birth of his triplets in June because they were on intensive care.

“My babies were actually born on January 18, 2019. They were delivered prematurely, so initially I had to deny the reports when it went viral. I told those who saw me at the hospital in the USA not to disclose that I had given birth because I wanted my triplets to live. I was so scared initially for their lives,” he said. 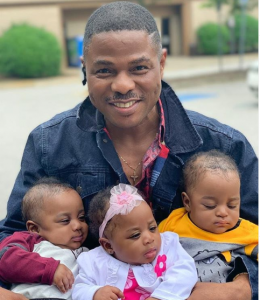 Yinka Ayefele with his triplets

Ayefele welcomed the triplets after over 20 years of childlessness. Appreciating his wife for the children, he thanked her for staying with him all this while.

Related Topics:I Thought My Premature Triplets Would Die – Yinka AyefeleYinka Ayefele
Up Next