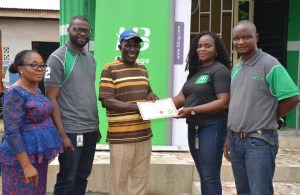 With the alarming number of market women, artisans and underserved population who are unbanked, Heritage Bank Plc has deepen its retail banking structure by growing its agent banking base to 400 ‘Corner Shops.’

This is in line with the financial inclusion strategy of the Central Bank of Nigeria, as Heritage Bank Plc launches agent banking services at the coastal town of Badagry in Lagos State.

The bank, over the weekend, commissioned an agent, Thy Grace, to provide a range of financial services to customers in the neighbourhood of Mowo under the Badagry Local Government.

The MD/CEO of Heritage Bank, Ifie Sekibo explained that the bank has continued to set standard in the launching of ‘Corner Shop’ to cater for the need of traders and artisans at different locations across the country.

According to him, the shop is aimed at giving the unbanked, especially in the rural areas the opportunity to enjoy financial services without the risk and stress of walking kilometres in order to visit a bank branch.

However, speaking at the commissioning in Badagry, the Zonal Business Coordinator, South-West, South-South, Agent Banking, Heritage Bank, Oluwakemi Adewunmi, described the feat as a major breakthrough that would relieve the people living in the Ikogazebbe community of the stress they hitherto faced in transacting banking services.

She said with the new Agent commissioned to represent Heritage Bank in the locality, banking services would no longer constitute a headache, but rather would be stress-free for all categories of bank customers.

According to her, anybody can benefit from the services of the agent whether you are a customer to Heritage Bank or another bank. Adewunmi explained that customers can open bank account, deposit cash, transfer money even to other banks and also pay bills. In view of the peculiarity of the community, she disclosed that the agent deploys mobile POS; adding that the device would make the agent make banking services available at the doorsteps of customers.

With the inclusion of Thy Grace, she said Heritage Bank now boasts of about 400 agents it has established in different parts of the country. She commended the agents for their commitment over the past two years that Heritage Bank’s campaign for financial inclusion started.

Her words: “The level of their loyalty is very high and commendable. Our agents maintain a clean record and they have been effective.”

In his remarks after receiving the Certificate of Authorisation to carry out agent banking on behalf of Heritage Bank, Hunyingan Pius Mifrinso, promoter of Thy Grace, commended the bank for the approval given to him.

He assured that the services of his agency would help to bring banking services closer to the host community. Before now, Mifrinso disclosed that for anybody to transact banking services, the person had to travel over a distance of 15km before getting to the nearest bank. His words: “The Ikogazebbe community is about 15km far from Badagry and for anybody to do a small banking transaction; the person has to travel to Badagry town.” Apart from the time usually wasted in doing that, he said transportation cost a minimum of N400.

Meanwhile, Mifrinso assured that with the new dispensation, the people in the neighbourhood could heave a sigh of relief as banking is now made easy. In order to effectively cover the area, he disclosed that his agency would recruit some roaming agents to comb the community for traders who might not have the time to deposit the proceeds of their sales in banks.

Agent banking is the delivery of financial services outside conventional bank branches, often using non-bank retail agents and relying on technology, such as card readers, point-of–sale (POS) terminal or mobile phones for real time transaction processing. It is an initiative to actualise the CBN’s policy on financial inclusion.