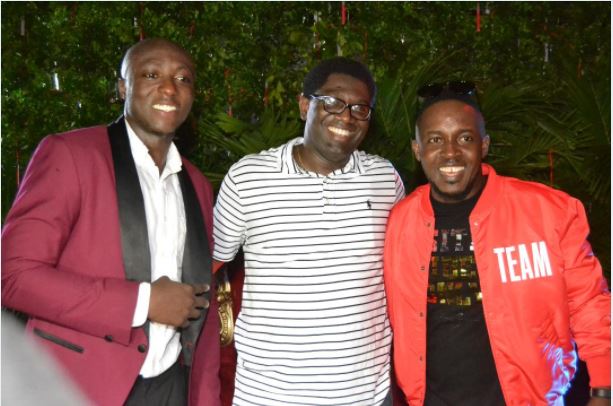 Celebrities and other socialites joined the winner of the Ultimate Party online contest, Adedamola Awoniyi, for a memorable night hosted by Gulder in Lagos, last weekend. The all-night gig brought together leading entertainers. MI Abaga, Dr. Sid, Ice Prince, Alexx Ekubo, Uriel Oputa and Blossom Chukwujekwu. The Ultimate Party, a dream-come-true experience, was one of the brand’s activations leveraging on Guy Code, a male-centric television series currently showing on MTV Base (DStv Channel 322).

Speaking at the party, the Marketing Director, Nigerian Breweries, Franco Maria Maggi, said the event was to strengthen the connection between Gulder, a premium brand from Nigerian Breweries Plc, and its consumers, adding that many of such experiences should be expected from the brand. “The idea is to reward the ultimate guy. There are millions of ultimate guys out there, but we cannot reward everybody at the same time. The Ultimate Party is for the man who is striving to achieve success,” said Maggi. He described the Ultimate Party as “a celebration of new beginning” for the brand. Maggi added: “For the consumers, the important thing is to stay connected to Gulder. This is because the brand will continue to celebrate them.

The week-long events leading to the party started with the unveiling of Awoniyi, an adventurous fashion designer and upcoming movie star, as the winner of the Ultimate Party contest. He was later hosted by MI at the rapper’s Lekki home where the duo discussed extensively about their favourite party, music and other adventures. Earlier on Friday, Awoniyi was treated to a spa session to prepare him for the experience, which the Kwara State-born entrepreneur described as thrilling. “I have never dreamt of this kind of treatment. I never thought of winning the competition. Of course, I am not afraid of trying new things. I am adventurous, which is the reason I participated in the contest,” he said.

The fashion maker said he was particularly grateful that a premium brand like Gulder honoured him while he “is still striving to attain success.” From the spa experience, hotel reception to the party venue, Awoniyi was given a royal reception. He selected the music played at the party, artistes that attended and other features that made the party truly unique and ultimate.

MI, who attended the party in the company of other showbiz stars, said he had many things in common with the Ultimate Party contest winner and was honoured to host him. “Both of us”, the multiple-award winning artiste said, “are bold, daring and on our journey to success.” He added that Awoniyi was among the most hardworking and adventurous young Nigerians he had come across in recent times.

Awoniyi was received with a performance by an Egyptian Tanoura dancer who set the tone for what turned out to be a thrilling night. At some point, the fascinating performer was joined by Awoniyi and his friends. This, perhaps, was the most exciting session of the show.

Earlier at a meeting with MI, the celebrated consumer described himself as a party lover. As at 3:30am on Saturday, he was still on the dancing floor with his friends. And at 4am, there was no sign that the party would end soon as over 70 per cent of the ‘clubbers’ were still having fun.

Critical things to consider when choosing a business partner