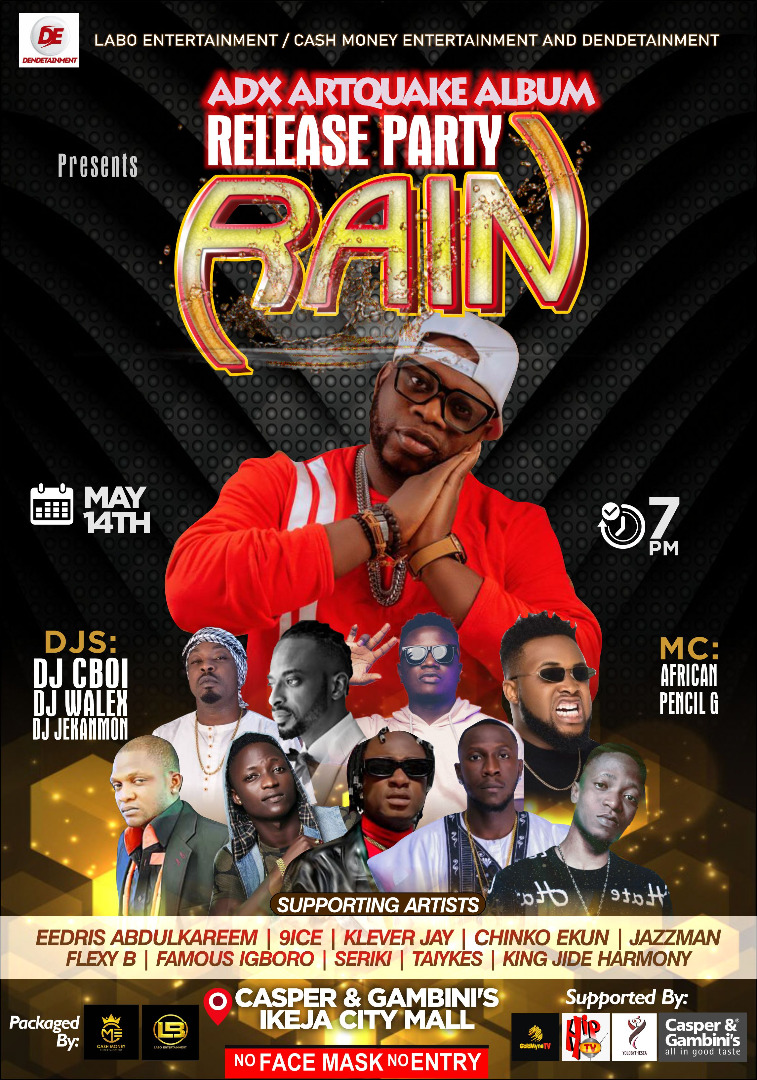 Adx Artquake one of the pioneers of Hip-Hop music in this part of the world has concluded plans for the anticipated star studded live in concert and the release party of his new album entitled- Rain.

The talk of the town forthcoming groove is being presented by Labo Entertainment, Cash Money Entertainment and Dendetainment to engage the target audience for a memorable event like no other.

Those who should know squealed that the live in concert and album release party is basically to give thanks to the almighty God for his life and the talents He has given him to add value to his generation through music.

The talented Afro Hip Hop singer with a unique powerful vocal delivery and extraordinary stage craft is doing everything possible to make a statement in the most competitive music playground in Nigeria.

Further findings revealed that Adx Artquake is an amazing and amiable artiste and video director, who has the pleasure of helping other young artistes in making their dreams a reality.

The awaited album release party would be attended by who-is-who in the entertainment industry and real hip-hop music lovers from different walks of life as it is positioned to be a Rain of fun and glamour.

Adx Artquake would be releasing his album compiled and delivered with his irresistible vocal power at the projected party billed to take place at the classy Casper & Gambini’s in Ikeja City-Mall, Lagos on Friday May 14, 2021 by 7pm.

Supporting artistes to make the event wow are Eedris Abdulkareem, 9ice, Klever Jay, Chinko Ekun, Jazzman, Flexy B, Famous Igboro, Seriki, Taiykes and King Jide Harmony. And top DJs like DJ Cboi, DJ Walex and DJ Jekanmo would be behind the wheel of steel to spice the night up. We also gathered from the industry watchers that the new album by Adx Artquake featuring some notable artistes is proudly produced by K Solo, Shoker, Lahlah, P Minor, Soso and Bosst Mix.

And, it is recorded to sendout warning signals to the self-acclaimed heavy weights in the music industry that he is ready to take over the scene with Rain that would soon be the power play for most Disc-Jockeys in Nigeria and abroad.

However, as part of the new guidance to keep safe during this pandemic period, all COVID-19 protocols will be enforced to make the album release party a huge success with a stern warning ‘No Face Mask, No Entry’ and maximum security guaranteed.