In its reaction, the EFCC said: ‘the fact is that Ibrahim Magu never attended any Buhari re-election gathering at Nicon Luxury Hotel, Abuja. At exactly 8:59am on Tuesday, December 4th, 2018, the EFCC boss was already at the Nnamdi Azikiwe International Airport, Abuja en route Lagos where he had engagement with Media Executives’.

Before the trip to Lagos, Magu visited a family relative who lodged at the hotel, Nicon Luxury. He went straight to the room where his relative was lodged and met with him very briefly before departing for Lagos where he met with newspaper editors. These facts were laid bare when Ogundipe called to confirm his story.

Magu is not omnipresent to have been in Lagos and also in Abuja at the same time. For Ogundipe to still come up with such a screaming headline after confirming from the Commission only shows that his mind was made up to do the hatchet job which he has exhibited by his write up. 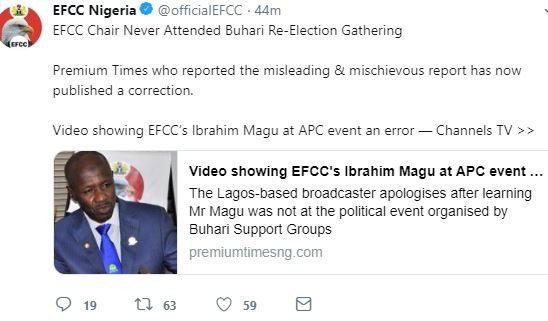 We want to make categorically clear that EFCC Acting Chairman, Ibrahim Mustafa Magu is neither a card carrying member of any political party nor is he a sympathiser of the ruling APC. He carries on his job professionally and remains a public officer who is apolitical and determined to see a new Nigeria where corruption would be brought to its knees.

In the meantime, we have contacted our lawyers and they are taking a cursory look at the controversial publication.

The publication had expressly stated that Magu was at the gathering to strategise on the re-election campaign of President Muhammadu Buhari.

It further said that “The event, which held on Tuesday, December 4, at Nicon Luxury Hotel in Abuja, was exclusively billed as a consultative forum for politicians of the ruling All Progress Congress. It was put together by the National Committee of Buhari Support Groups, a political action committee loyal to President Buhari”.