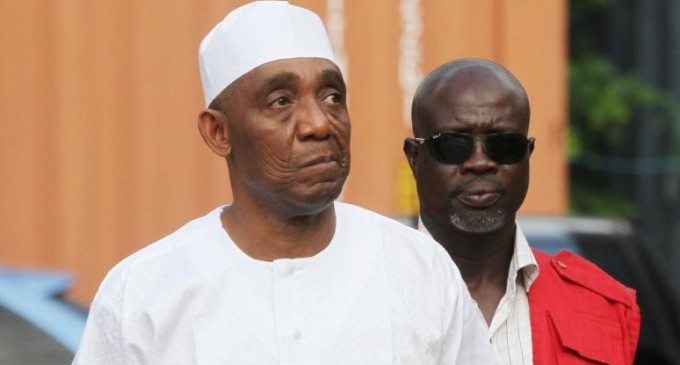 The Economic and Financial Crimes Commission, EFCC,  on Tuesday,  April 4, 2017,  arraigned a former Kwara Hotel boss, Mohammad Gobir alongside Mondial Defense Systems Limited before Justice J.E. Oyefeso of the Lagos High Court sitting in Ikeja on a five-count-charge bordering on conspiracy, stealing and forgery to the tune of N277,020,000.00(Two Hundred and Seventy-seven Million, Twenty Thousand Naira).

The accused allegedly converted the money meant for the purchase of security bands for Kwara State government to personal use.

One of the charges reads: “That you Mohammad Gobir and Mondial Defence Systems Limited sometime in November 2012 at Ikeja within the Ikeja Judicial Division dishonestly converted to your own use the sum of N92,340,000.00 (Ninety- two Million, Three Hundred and Forty Thousand Naira) property of the Kwara State Goverment entrusted to you for the purchase of 3(three) Units of Armoured Personnel Carriers (APC)”.

Another charge reads: “That you Mohammad Gobir and Mondial Defence Systems Limited sometime in the year 2013 at Lagos within the Ikeja Judicial Division dishonestly converted to your own use the sum of N184,680,000.00 (One Hundred and Eighty- four Million, Six Hundred and Eighty Thousand Naira) property of the Kwara State Government entrusted to you for the purchase of 3(Three) Units of Armoured Personnel Carriers (APC)”.

The accused  pleaded not guilty to the charges when they were read to them.

In view of their pleas, the prosecution counsel, Zainab Ettu, asked the court for a trial date and prayed that the accused  be remanded in prison custody.

However, counsel to the accused urged the court to grant their clients bail.

The prosecution counsel  opposed the bail applications on the grounds that the first defendant, Gobir,  is a flight-risk who might abscond from trial if granted bail.

” My Lord, he has once jumped the  administrative bail granted to him by EFCC, ” she said

After listening to all submissions ,  Justice Oyefeso ruled that the court had a discretion in this circumstance,  adding that the offence is bailable.

Consequently, Justice Oyefeso  granted the first defendant bail in the sum of N50 million with two sureties in like sum.

One of the sureties must be a blood relation to the first defendant while the other must be a land owner in Lagos  State.

The two sureties must tender their  tax payment clearance for two previous years.

The judge further ordered that  the residential address of the first defendant should be verified by the court,  while his international passport should be submitted to the court Registrar.

Gobir was ordered to be remanded in Ikoyi  prison pending the perfection of his bail conditions.

GREY GROUP CHOOSES CENTRESPREAD AS ITS LEAD AGENCY IN NIGERIA