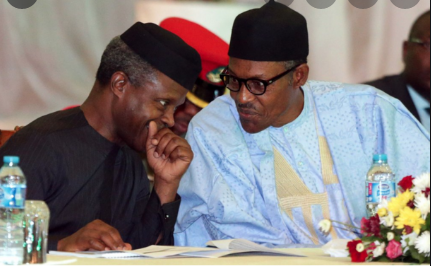 Given the bad governance that has given vent to mass unemployment, abject poverty, high corruption, insecurity and gross official recklessness, the controversial remarks attributed to Vice President Yemi Osinbajo, including the innocuous remark that President Muhammadu Buhari was the only politician in Nigeria at this time with the charisma and credibility to rally the nation behind the patriotic push to rise above its current challenges, amounts to provocation and a collective insult on the sensibilities of the Nigerian people, haunted by a sense of a misplaced hope, that expecting good leadership from the present administration is nothing more than an exercise in futility and self-delusion. Nigeria certainly deserves better than a President who promised change, only to end up with people with fossilized ideas that have marooned the nation to its present lackluster state. Therefore, the ridiculous assertion by the vice-president that Buhari is the most popular politician that Nigeria has had in generations is laughable and should attract no further comment! In the judgment of an average sense of decency for a nation in distress, Osinbajo’s pompous panegyric is a moral weakness of asinine proportion.

Speaking during an interactive session with top officials of the Nigerian High Commission in London,

Osinbajo stressed the need for Nigeria to remain one, united and indivisible; assuring that its challenges would soon be overcome. Describing Buhari’s popularity and credibility as a crucial factor in galvanizing the entire nation to resolve the challenges, Osinbajo said: “The president is possibly the most popular Nigerian politician that we ever had in generations. He is possibly the only person, who can go into a place or somewhere without bossing people to gather and they will come and listen to him speak. We need that level of credibility to be able to solve problems in our country. And I think because of his level of credibility, despite everything, he is still the only one that can call everyone, and even people, who do not necessarily agree with him, know that he is a man of his words.”

This kind of glib talk by Osinbajo is indeed pathetic, and a tragedy for Nigeria. Any Nigerian who can describe Buhari in such glowing terms is either a fool, a sycophant or does not live in Nigeria. The Vice President is neither a fool, nor does he live abroad; so we can only assume that he is a sycophant. With serious economic, infrastructural and security challenges to contend with, the worries of an average Nigerian are about the basic necessities of life – security, food, shelter, healthcare, education and jobs all of which remain elusive under the present administration. Indeed, since Buhari took office in 2015, the situation has moved from bad to worse, and as the sitting vice-president, Osinbajo also bears direct responsibility for the perfidy and ineptitude of the Buhari government. While Osinbajo is free to ingratiate himself to his boss, his remarks are the best advertisement for Nigeria’s poor politics.

Contrary to what Osinbajo might think, public office is not a popularity contest; it is a call to national duty and only the ready, willing, and able deserves it. While the opportunism of the Nigerian politician rankles, the belated attempt to elevate Buhari to a higher leadership pedestal was not only insulting and denigrating, but also contemptuous of the average Nigerian who continues to suffocate under the yoke of poverty and bad governance under Buhari’s watch. Osinbajo’s open celebration of that travesty was an insult that diminished even his own person. His comments were a self-indictment for impunity which underscores the travails of democracy that has been bastardised to have a peculiarly Nigerian definition, making a mockery of the beautiful ideal.

The vice-president boasted with candor that Buhari is the only politician that can hold Nigeria together as one united country. Hear him: “If you look at all of us sitting here, we represent all the geopolitical zones. This is the Nigeria that will succeed; anything else doesn’t make sense.” Given the pervasive nature of Buhari’s “Islamization” agenda where he has abused the power of his office to appoint his Hausa kith and kin into the commanding heights of authority in all strategic positions in the army and public service, the growing agitations by centrifugal forces to break the country apart should be evident to anyone not blinded by self-interest that the bonds holding the disparate ethnicities together within the territory called Nigeria are becoming increasingly tenuous. The country seems to be on auto-pilot and sleep-walking towards implosion with nobody in charge. This leadership vacuum has, of course, left in its trail, generalized insecurity and economic crises, political turmoil and wanton impoverishment of a beleaguered people traumatized by hunger, poverty, decrepit infrastructure, receding fortune, medieval diseases, corruption and above all, insecurity and inept government lacking in ideas.

President Buhari, presumably a good student of history and a dramatis personae angry enough at the nation’s steady decline, has had a golden opportunity to change the narrative, but has failed woefully. A comparison of Nigeria’s experience in the quest for development with other countries provides a clear answer to the question: why has Nigeria failed or why is Nigeria failing? The poignant and direct answer is the absence of a steady supply of good, selfless leaders to galvanize the potentials of the country for greatness. Ironically, Nigeria started out excellently as good leaders were not in short supply at the nation’s independence. If Osinbajo needed any lecture on popular Nigerian leaders, all he needs to do is go back to history. With their sterling qualities, the likes of Nnamdi Azikiwe, Obafemi Awolowo, Michael Ajasin, Ahmadu Bello, Tafawa Balewa, Michael Okpara, Aminu Kano, Anthony Enahoro and many others of that era illuminated the political horizon with ideas for a nation bound for the greatest of heights. These men till date remain beyond compare. Buhari cannot play in this league.

But the tragedy of Nigeria is that the kind of leadership these gentlemen offered has consistently defied replication since their demise. Now, the country is bedeviled with unabashed pretenders like Buhari, Osinbajo and their fellow co-travelers, to positions of leadership; men and women who’re only actuated by the impulses to self-aggrandizement, conspicuous consumption and primitive material accumulation for themselves and their families. Their hearts do not throb with the questions of how to improve the lot of the people they claim to serve and they are not jarred into altruistic service by the stark, pestilential misery of their fellow citizens. In his short treatise, “The trouble with Nigeria,” Chinua Achebe identified the failure of leadership as the bane of the country’s woes. Coterminous with this failure, Achebe averred, was the “false image” Nigerian leaders have of themselves. Osinbajo exemplified this “flamboyant imaginary self-concept” with his self-serving adulation of Buhari. It was indeed pathetic.

But the nation needs to break this cycle of perfidious leadership by having in power and in offices men or women with the right qualities to fulfill the desire of Nigerians for a just, equitable country; leaders propelled by a vision to make Nigeria the best place for its inhabitants. Nigeria needs leaders who are not suddenly attracted to public office by the prospect of primitive wealth accumulation.  Not leaders ferried into public office by auspicious circumstances but ones who, before seeking a public office, thought of what to do with the office and planned for the office’s execution. The leaders Nigeria needs are those who look beyond here and now and offer a direction. They may not have all the answers but do not lack the will to dream big dreams as well as the wisdom to galvanize the nation to dream with them. Leaders of proven integrity and outstanding track record who make huge sacrifices to develop the country, propelled by the knowledge that leadership is for service; leaders endowed with the gift of steady application; who in range of vision and depth of conception tower above their contemporaries.

Nigeria needs leaders of iron resolve and indomitable courage, who live above the fog in public duty and in private thinking; the ones who would look Buhari in the eye and speak truth to power when the president’s policies are inimical to the health of the nation; leaders with an exceptional sense of history to lead Nigeria out of the doldrums; not tired old men, tottering on the borders of senile decay. How can anyone outside a mental asylum expect change from Buhari and his cabal of tired old men, ill-equipped for the enormous responsibility of 21st century nation-building? Even if their age is no problem; what about the age of their ideas? The nation undoubtedly gets a raw deal when the wrong people run the country – garbage in, garbage out! Democracy thrives on regenerative change, so the point must be driven home to Buhari, in whatever language he understands that at 78 years, it is absurd for him to be ruling Nigeria, let alone parading himself as a unifier and change agent.

Nations fail or succeed because of leaders and if Nigeria must develop, it is up to them. Two years until the end of his second mandate in 2023, the leaders who promised change must chart a trajectory of values in sync with that promise, values that are clearly different from those that have retarded the nation’s development. They must articulate a vision and lay out the plan for its attainment. Needed now are leaders who, in words and in deeds, make Nigerians feel secured in the confidence that they belong to the best nation in the world. This demands that Buhari and Osinbajo rise up to the challenge of personal example which is the hallmark of great leaders. It is a denigration of the collective spirit and a negation of the inviolability of the Nigerian people, for the vice-president to conduct themselves in such a shameless and indecorous manner as he did with patently false and misleading claims about a president who many Nigerians are anxious to see go.