In a Facebook post he shared, Gumi averred that e-transmission of election results will stop money politics, mediocrity, and political blackmailing.

He added that it will reduce rigging and votes manipulation which bad politicians have been using to hold the country at its jugular veins.

“Since 1999 when the khaki returned to the barracks, we’ve not heard the better good news for Nigerians as this singular act of making it legal to transmit elections results electronically. Though, it remains the funding and implementation which are yet to be seen.

“Nonetheless, this will in no way immeasurable reduce the rigging and votes manipulation, the only way bad politicians have been able to hold the nation for a long time at its jugular veins. Money politics, mediocrity, and political blackmailing will all vanish or nearly so by making every vote genuinely counted. This is a big plus for our Senate and the democracy that gives Nigerians free will to choose and repel leaders they so wish.

“I.N.E.C has to immediately with the collaboration of NGOs embark on a voter’s awareness campaign, which should include the rural areas. With satellite internet technology perfected and available, no inch of Nigeria soil should be out of reach of the election.

“There are a lot of technical issues, involved, but nothing is insurmountable looking at the experience of countries like India with almost 800 million voters.

“We have been advocating this since early 2015 when we had a conference in Gamji hall Kaduna attended by representatives of I.N.E.C, PDP and APC under the auspices of ‘MY CHOICE MY PRIDE FOUNDATION’. Notably, Engr. Buba Galadima made a speech on behalf on the APC. It was memorable and We are glad that some semblance to free and fair elections is on the horizon now as we may say good riddance to bad governance.” 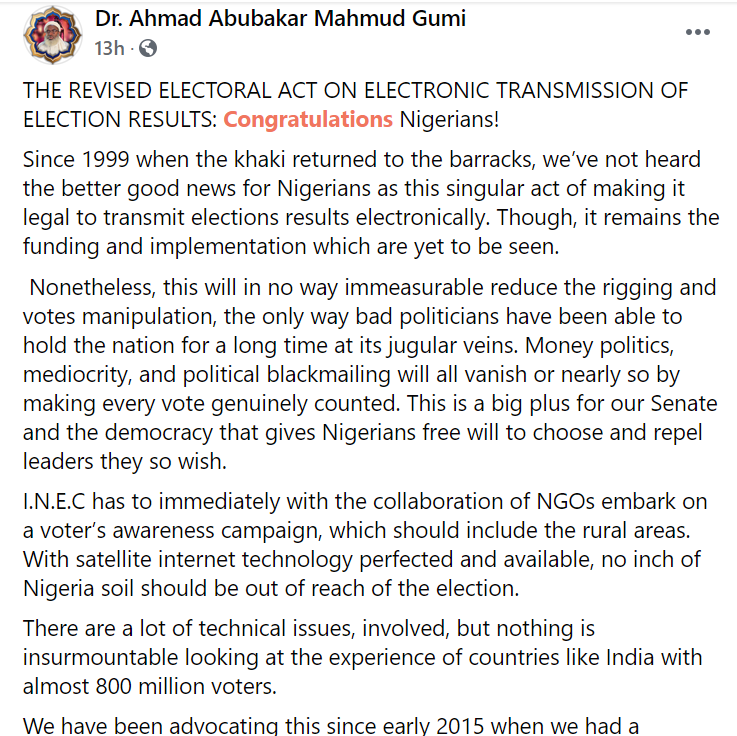