Men of the Department of State Services (DSS), have attempted to rearrest convener of the #RevolutionNow protest and his co-defendant Olawale Bakare.

This comes less than 24 hours after they werr released following an order by a Federal High Court.

Recall thtlat the duo were released on Thursday, December 5, after the court gave the DSS 24-hour to release the duo.

However, reports coming in have revealed that DSS operatives tried rearresting Sowore and Bakare. 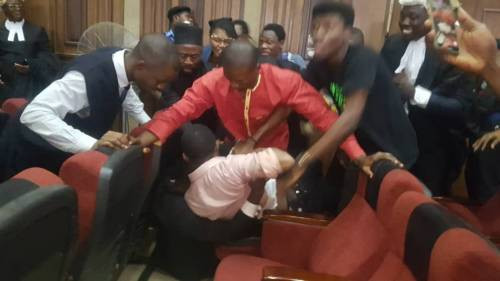 Accorsing to a report monitored on Sahara Reporters, DSS operatives are currently holding the court siege refusing to allow Sowore and his lawyers come out of the court room after disrupting the day’s trial.