Davido Music Worldwide boss, David Adeleke popular as Davido has reacted to claims by Peruzzi and Kiddominant that they wrote most of his songs.

In an Instagram Live session, the duo claimed that they wrote most of Davido’s hit songs.

According to Peruzzi, he wrote Davido’s hit songs such as ‘FIA’, ‘Nwa Baby’, ‘Risky’ and ‘Assurance’. On his part, Kiddominant said that he wrote hits such as ‘Dodo’, ‘Fall’, ‘The Money’, and ‘Like Dat’ for Davido.

Reacting to the claims by the duo, Davido claimed he to has written a song, adding that he wrote ‘Shekpe’

See his reaction below: 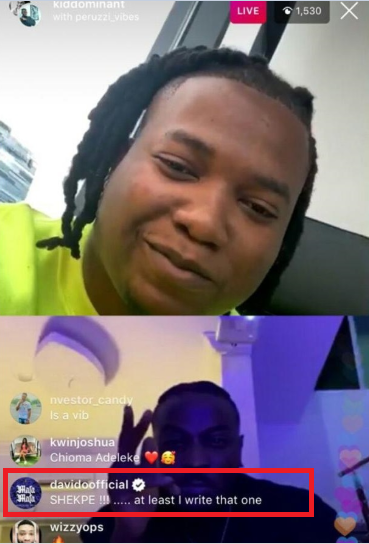 Related Topics:davidoDavido Reacts To Claim Of Peruzzi; Kiddominant Writing His Hit SongsNigerian Producers Fight To Get Paid - KiddominantPeruzzi
Up Next

Ice Prince Ask God To Bring An End To COVID-19