The singer joined the company as a Director.

He took to his Twitter handle to announce that he is gradually becoming a member of his father’s Pacific Holdings company.

Davido accompanied his post with a picture that appeared to have been taken within the premises of the company.

A visit to the official website of the company shows that the singer has now been brought on board as a director.

Davido’s name was listed alongside other executives in the company. His sisters, Sharon and Ashley, were listed as executive directors while the singer’s elder brother, Adewale, was also listed as a director in the company. 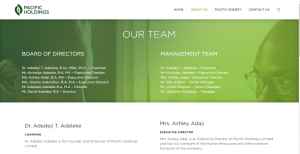