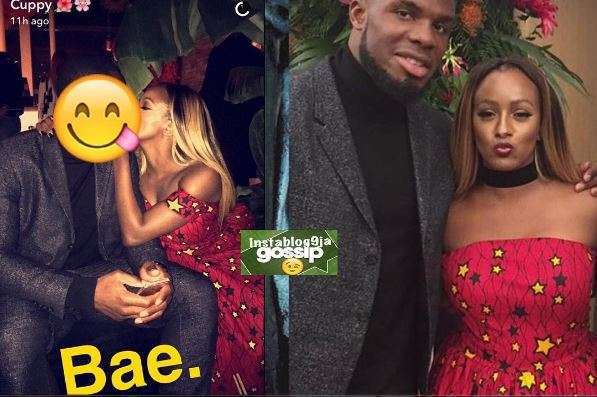 DJ Cuppy, is supposed to be the focused daughter of a spin and spank businessman, Femi Otedola. However, she has fallen below that pecking order.

Presently, the lady who has struggled to impress with her celebrity DJ status has been demystified, as she has been revealed to be an ordinary lady.

DJ Cuppy, embarrassed her organised and discipline father when she unveiled what was supposed to be a secret relationship.

Not known to showoff their relationship, non of the Otedola offspring has embarrassed the family in such a manner as DJ Cuppy has.

Supposedly  in any relationship with Nigerian international, Victor Anichebe, the DJ showed how vain she could be sharing a public kiss with  the footballer.

Since the pictures hit the internet, those who should know say it has been one call after the other from embarrassed members of her family.

DJ Cuppy erroneously shared romantic relationship pictures of herself kissing  the Sunderland FC striker with his face cleverly hidden with an emoji. However, another picture separately obtained revealed the real identity of the man in the picture as Anichebe.

DJ Cuppy was recently on vacation in Spain with the former West Brom player.

This is a massive diversion from the publicity of the Fox  Life TV interview which she recently did.