Reactions have been trailing the husband who fought a man who took his wife to Burna Boy’s concert.

Latest to react is Daddy Freeze. The AOP reacted to the trending video in which a husband is seen fighting another man for taking his wife to Burna Boy’s concert in Lagos.

Daddy Freeze wrote “if your wife would rather be with someone else at a concert, please set her free and move on”. 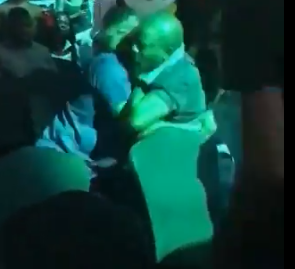 He went on to give a personal example of his failed marriage saying;

Marriage as it was intended by God is supposed to be a ‘spiritual’ union first, before a physical one. If she is willing to do this, then it’s either her spirit is no longer in the union or her spirit never was.

Fighting her physically or fighting for her physically is TOTALLY wrong and it likens what was meant to be a spiritual union to a demonic possession, where just like demons ‘possess’ their victims, spouses are under the deluded impressions that they ‘own’ or possess one another, and this is absolutely not the true picture of the marriage in Christ.

From the day my ex left in June 2014, I have never picked up my phone to call her or fight her, for her to leave her spirit was no longer in the union and to be entirely honest neither was mine!

I wished her well and moved on myself, I’d advice you all to do the same instead of this unnecessary embarrassment you are bringing upon yourself by literally turning the 26th of December into a ‘boxing’ day!

More Trouble For Runtown As His Lamborghini Gets Damaged