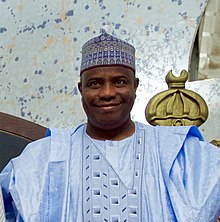 Sokoto State Governor, Aminu Tambuwal, has blamed the Minister for Humanitarian Affairs, Sadiya Umar Farouk for the delay in the distribution of Covid-19 palliatives.

According to him, the minister requested to be around before the distribution could commence.

Recall that the past weeks have been dominated with reports of warehouses looted nationwide, with residents carting away palliative materials.

Admitting that there had indeed been a delay in the distribution of palliative materials, Tambuwal pleaded with residents of the state to maintain peace, adding that there is no case of hoarded palliatives in the state.

He said, “Sokoto state has no case of hoarded relief materials meant as COVID-19 palliative.

“The state never recorded both the protest and the attendant mayhem.

“There was one by Coalition Against COVID-19 (CACOVID), which was a donation by an ensemble of philanthropists.

“The distribution of this category was a bit delayed months ago because the donors wanted the donations to be pooled.

“As soon as that was achieved, we distributed the materials under the supervision of the Secretary to the State Government (SSG), Alhaji Sa’idu Umar.

“The other category were those items brought by the federal government through the office of the Minister of disaster management, humanitarian affairs and social development, Sadiya Umar Farouk.

“The items were received on 17 October, precisely nine days ago. The little delay we had in distributing the FG palliatives was at the instance of various requests by the minister.

“She needed to be personally around when the exercise started. She made the requests five times before turning up.

“So, it is not our fault that the items are still being distributed as we speak. It was the minister who said we should wait until she comes. And that was what happened.”