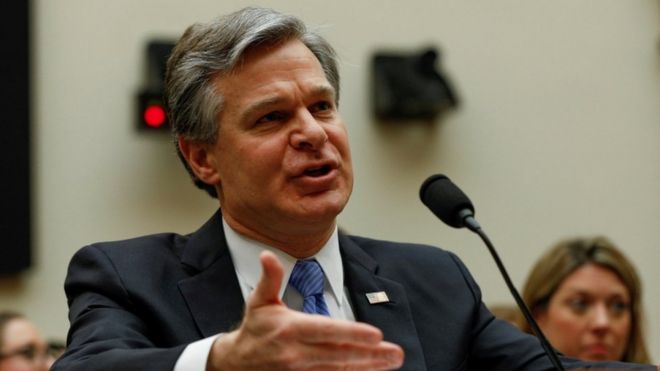 The director of the FBI has said that acts of espionage and theft by China’s government pose the “greatest long-term threat” to the future of the US.

He said China had begun targeting Chinese nationals living abroad, coercing their return, and was working to compromise US coronavirus research.

“The stakes could not be higher,” Mr Wray said.

“China is engaged in a whole-of-state effort to become the world’s only superpower by any means necessary,” he added.

In a nearly hour-long speech on Tuesday, the FBI director outlined a stark picture of Chinese interference, a far-reaching campaign of economic espionage, data and monetary theft and illegal political activities, using bribery and blackmail to influence US policy.

The FBI director mentioned a programme called “Fox Hunt”, which he said President Xi Jinping had “spearheaded” and he said was geared at Chinese nationals living abroad seen as threats to the Chinese government.

“We’re talking about political rivals, dissidents, and critics seeking to expose China’s extensive human rights violations,” he said. “The Chinese government wants to force them to return to China, and China’s tactics to accomplish that are shocking.”

He continued: “When it couldn’t locate one Fox Hunt target, the Chinese government sent an emissary to visit the target’s family here in the United States. The message they said to pass on? The target had two options: return to China promptly, or commit suicide.”

The programme was originally begun in 2015 to target people accused of corruption and has reportedly led to the capture of thousands of fugitives.

However, reports of extraordinary rendition of political opponents by Beijing have multiplied in recent years, starting with Gui Minhai, one of a group of Hong Kong booksellers who disappeared in 2015 and resurfaced in Chinese custody. Unlike the others, Mr Gui disappeared abroad – in Thailand – rather than from Hong Kong itself.

China is fast becoming a new kind of threat to the West, not so much because of its growing military capabilities – though that is a factor – but because in economic and technical terms it is already a peer competitor of the United States, and a peer competitor in a very different kind of world.

Nineteenth Century great powers competed more or less on equal terms but operated in a far less integrated international system. In the second half of the 20th Century, the Soviet Union was a peer military competitor of the United States, but with a relatively weak economy largely isolated from the wider international system.

China, however, has huge and growing economic muscle. It shares much of the same economic space with the West and its dominance of crucial supply chains – think medical PPE for example – only enhances its power.

The level of integration of today’s globalised world and the importance of data and information only act as force multipliers for Beijing’s overt and covert global reach.

In the unusual address, Mr Wray asked Chinese-born people living in the US to contact the FBI if Chinese officials target them seeking their return.

The Chinese government has defended this programme in the past, saying it is part of a legitimate anti-corruption effort.

The threat posed by China will be further addressed by the US attorney general and secretary of state in coming weeks, Mr Wray said.

The address comes amid heightened tensions between the US and China.

US President Donald Trump has been highly critical of China amid the coronavirus outbreak, repeatedly blaming the country for the global pandemic. In another move, Secretary of State Mike Pompeo said this week that the administration was looking at banning Chinese apps – including the hugely popular TikTok.

The apps “serve as appendages of the Chinese Communist Party’s surveillance state”, he said.

Magu And The Abuja Power Game