Former Minister of Aviation, Femi Fani-Kayode, has urged EndSARS protesters to extend their demand to the resignation of President Muhammadu Buhari and his entire cabinet.

Fani-Kayode stated this in a series of Tweets shared from his Twitter handled on Monday, October 12.

”The #EndSARS protests represent a watershed in the history of demonstrations in Nigeria. For the first time in the last 60 years the people have recognised the fact that they can effect change and bring Govt. to its knees by taking to the streets in peaceful protest.

“I commend the courage of those that came out into the streets & spoke out in the traditional & social media & I urge them to not just call for the ending of SARS but also for the resignation of Buhari.

“A President that has no value for human life and under whose watch more innocent Nigerians have been brutally murdered than at any other time in our history outside of the civil war has lost his legitimacy and has no right to remain in power.

“#Endsars and #EndPoliceBrutality is just the beginning. #EndBuhari’s rule and the resignation of Buhari & his entire Govt. must be the final destination.

“Many have been killed during this #Endsars demonstrations & they are still being killed. Their blood must not be allowed to have been shed in vain. Every drop of their blood must count for something and must act as a catalyst to a total change & overhaul of the entire system & a new beginning.

“It must lead to the end of Buhari’s sheer wickedness & impunity & it must usher in a new Nigeria where mass murder, ethnic cleansing, genocide, police brutality, tribal & religious divisions corruption, nepotism & impunity are things of the past.

“Take it or leave it, this may well be the beginning of our own Arab spring . And if it does not happen now it will surely happen later because the seeds of change & a peaceful and spiritual revolution have been planted,”he tweeted 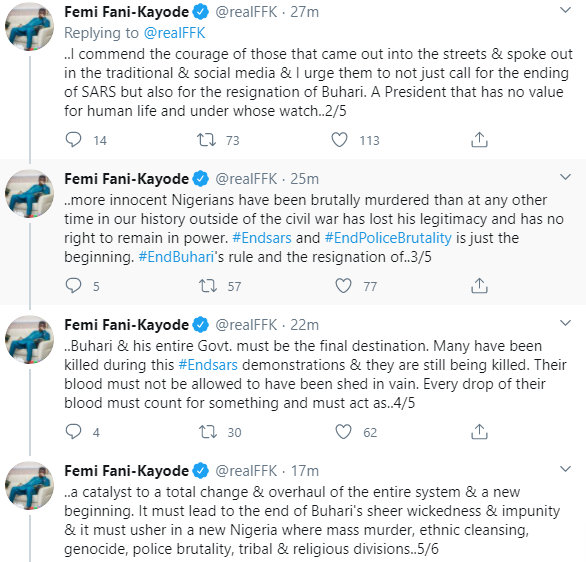